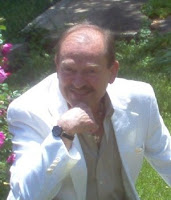 Victor Banis has been writing GLBT themed novels and short stories for almost half a century. His published works range from soft-core erotica, to romance, to futuristic novels, to mysteries. He was at the forefront of the early gay-rights moment in the 60’s, and has become an icon in gay culture today. Victor was kind enough to chat with me earlier this year, and the following interview chronicles what this remarkable man had to say:
Q: You published several terrific novels back in the ’60 when gay literature was just taking off. But then you didn’t publish anything for a number of years. If it’s not too personal, can you tell us why you stopped publishing work for so long a time, and what brought you back to publishing your work.
Complicated answer: I'd moved from the west coast paperback publishers to the big NYC houses, and it was a different ballgame; too cutthroat for me. I had major quarrels with a couple of the publishers and I was very angry, and realized one day while I was writing that I hated it. I had started writing just for the joy of it, and I had lost the joy. So, I took a break.
Simple answer: I was probably burned out.
What brought me back: Fabio Cleto tracked me down and asked if he could try to get the C.A.M.P. books reissued, and he did. Now, bear in mind, I hadn't altogether stopped writing, but I hadn't worked on any novels and hadn't written anything for publication; but, then, this young man showed up in my bed one night, he told me his name was Harvey, and he started talking to me about the problems he was having way in the future and, well, I'm a sucker for a young man in my bed, so…
Q: Who are the authors who most influence you, both in your early career and now?
Hmm – been many of them. Different writers for different reasons. Mary Stewart for her sense of place, and those wonderful heroines, feisty but virtuous. And Graham Greene, because he always made/makes me think. Maugham – I come back to him a lot, he was such a wicked old thing; he always insisted he couldn't write humor, and I think he wrote some of the funniest stuff I ever read.
To read more of this interview, click here
.
.

Posted by AlanChinWriter at 5:27 PM

Wonderful interview! It's so important to keep the connections to those who have blazed the trails and are still walking them. Great to honour them.

What an honor, alan, having such a widely renowned author on your blog - kudos! and thank you, Victor, for sharing with us today. I really appreciated this-

Q: What, more than anything else, fills you with rage?

No jesting here: People being cruel to others, especially to the weak and vulnerable; you can tell an awful lot about a person's character by how they deal with those who can't do anything about it.

Fantastic interview, Alan! I love to read any of them with Victor because he's really so down to earth and generous with his knowledge. He often lends to that sense of "having fun" with what I'm doing that he advocates.

Thanks to you both!

Neat interview. It certainly helps to know that others have struggled on the road to getting their words out.