Book Reivew: Do You Remember Tulum by Alex Jeffers 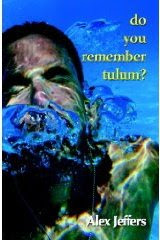 In 1977, Alex, a nineteen-year-old, would-be novelist, relocates to a small town in southern Mexico. Shortly after his arrival, his boss arrives with ten students on spring break, and Alex must act as driver and chaperone to the, only somewhat younger, students. Among the youths that have come to explore ancient Mayan sites are dark, sexy Peter and quiet, mysterious Keenan. During the two week expedition where Alex pilots the boys across the Yucatan in an old van, Peter and Keenan’s sexual advances upend the writer’s comfortable life, making him question everything he knows about love and relationships.

A dozen years later, with a spur-of-the-moment decision, Alex leaves his Boston lover and returns to Mexico to explore his past. At Tulum he begins a rather long and detailed letter to his abandoned lover, to explain his abrupt, inadequately explained departure. As Alex tries to explain the effect the 1977 trip had on him, a then confused and frightened youth, he pours his guilt, regrets, desires, and love onto the pages of the letter, letting us know how the youth became a man capable of expressing love.

Whenever I interview a writer, I always ask what book he or she has read by another author that they wish they had written. Well for me, Do You Remember Tulum is the book I wish I had written. It is a novel, yet it is beautifully written in the form of a lengthy and delightful love letter. The prose is some of the loveliest and moving that I have read. It gave me the feeling of voyeurism, that I was secretly reading someone’s letter to his lover, with all the passion and intimacy of two people deeply in love. And through this letter, this peeking into the narrator’s experiences, hopes, and dreams, I watched him map the geography of love.

This is not an easy book to read. There were times when I found the story-line to be glacially slow and bogged down in delicious detail, and it often seemed to be rambling on with seemingly no direction. That aside, this travelogue never felt tedious, because the marvelous prose carried me along as if in a dream, not wanting to be wakened and confronted by the real world again. There were several parts that were stunning, and I couldn’t put it down.
This is not book for everyone. People who need an obvious plot to carry them along, or bold characters who never falter, should not attempt this read. But for readers who love subtly, who enjoy seeing themselves caught within the dashes of ink on the page, who are capable of discovery, then I highly recommend this book.

Posted by AlanChinWriter at 1:34 PM

Wow, Alan, great interview and really weird coincidences for me.
One of the blogs I follow is of a young, gay Jew coming to terms with being gay and trying to remain true to his heritage. He just posted a video of Ivri Lider doing a cover of "I Kissed a Girl" - a really stupid song as "sung" by the female performer whose name I forget. In Lider's arrangement and video the song takes on a whole new meaning and, with simple acoustic guitar and no out there visuals is quite good. The guy's voice is smokey and sexy.
And the title of the album that Jeffers refers to means: New People.
Got a real jolt when I saw him write that he was Robinson Jeffers' grandson. My Lord, I read him in HS!
Loved the whole damn interview!