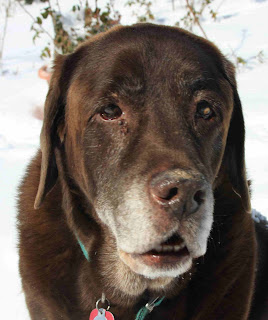 This is a bittersweet post for me. I want to write about what my dog Smokie is teaching me. You see, last week he came down with a digestive track infection, which meant vomiting and diarrhea – lots of diarrhea – all through the night. Him being a rather large Labrador, and his age being well beyond thirteen, any illness is a serious one.

The next day, when it became obvious it wasn’t clearing up, and he was getting weak from dehydration, I took him to the vet. They put him on an IV to restore his fluids, and also medicine to clear up the diarrhea. He was laid up for three days, during which time he was too weak to stand up. But on Saturday we brought him home.

So for the past four days, he’s been teaching me the meaning of love, of patience, of giving of myself. At first he refused food and water. I literally had to pry his mouth open and force food down his throat. But that was an easy problem to work through. The harder issue is that, being so weak coupled with the fact of several days on end of lying on a pillow, his hind legs no longer function properly. For him to walk, I have to wrap a towel under his belly and lift his hind quarters in the air, then I have to hold him up while we walk out to the yard. I’m doing this five or six time a day to give his hind legs exercise. The hope, of course, is that his legs will regain enough strength that he will be able to walk on his own. If they don’t, which is likely, I’ll have to put him down. But I’m not giving up hope, not yet.

He doesn’t seem to be in pain, so the idea of putting him down simply because he can’t walk seems cruel. I lay down with him on his pillow, and he still enjoys all the attention – the petting, the scratch behind the ear, the treats. So he still has the capability to enjoy life.

And what I’ve learned, am still learning, is that as long as he’s capable of enjoyment, as long as he’s not in pain, then I’m willing to do whatever it takes to give him that extra day or week or month of life, because he has taught me the depth of my love for him. I’m not kidding myself. I’ve known for a while that his time is drawing to an end. So I’m am literally thinking in terms of weeks or a month.

He has been such a loyal friend for these past thirteen years, and a huge part of my life. He gives unconditional love and asks for only food, a walk, and some pats on the head in return. Only one other time of my life have I experienced this kind of heart wrenching loss, when my father passed away. Indeed, I’ve recently learned that I love Smokie as reverently as any of my immediate family. Only my husband stands above him in importance.

I will do whatever it takes to keep him comfortable and give him that extra time. Each day I spend with him, no matter how hard, is another day of a shared love.

Posted by AlanChinWriter at 5:20 PM