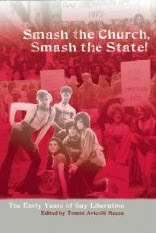 Smash the Church, Smash the State is an impressive collection of essays, memoirs, poems and pictures celebrating the explosive period in the Gay Liberation Movement from pre-Stonewall, to deep into the AIDS crisis, to today – forty years of battling oppression. There are fifty works submitted by the people who were there on the front lines while the bottles and purses and wigs were flying. From the first high heel thrown at Stonewall, to the birth of the Sisters of Perpetual Indulgence, to performances by Sylvester and the Cockettes, to the political rise and fall of Harvey Milk – it’s all there in beautifully written prose by some of the most influential people in the Gay Liberation Movement.

These stories are written by, and are about, the lesbians, gay men, and transgender people who battled oppression on many fronts. These writers share their unique perspectives, ideological ideas, personal memories, and their own celebration of revolutionary spirit that shaped the movement.

Reading these different perspectives, it became clear that the Gay Rights Movement was a slow, often painful progression that started with properly dressed “homophiles” marching around Independence Hall, and grew in anger and volume to a rowdy bunch of militant drag queens, long-haired hippie militants and lesbian feminists.

The times were ripe for revolt in the late 1960s, when Stonewall erupted. People were protesting the Viet Nam war, groups like the Black Panthers were leading the Civil Rights Movement, and the Women’s Movement was underway. From this fertile ground sprung the Gay Liberation Front, who’s statement of purpose read:

“We are a revolutionary group of men and women formed with the realization that complete sexual liberation for all people can not come about unless existing social institutions are abolished. We reject society’s attempt to impose sexual roles and definitions of our nature.”

Interesting that today gay rights organizations fight for acceptance in the military and sex-sex marriage, which moves gay men and women a step closer to living like heterosexual couples, where as in the sixties, seventies and eighties, they were militant and wanted to destroy anything that stood in their way of being flamboyantly themselves and expressing their sexual identity.

This book is a proud testament to the radical activists who stood their ground, took their knocks, and showed love and bravery and solidarity in the face of hatred and violence. Their spirit and struggle inspired me, educated me about a little-known part of my own history, and made me even more proud to be a gay man. I highly recommend this book to everyone.

Posted by AlanChinWriter at 11:56 AM

Hi Alan, Checking in here after traveling to see what you've been up to. I remember Stonewall and I also remember the Harvey Milk assassination by Dan White and the ridiculous "Twinkie Defense." Those were days - back then I was a long-haired hippie and flower child.