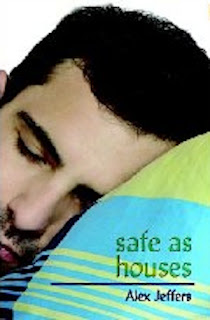 Allen Pasztory was raised by Hungarian immigrant parents who were both deaf. Even though he hears, he was brought up talking with his hands and facial expressions. He meets Jeremy while working at an advertizing agency in San Francisco. The two begin a rocky relationship until Allen finds out Jeremy is raising a son, Toby. The idea of being a family, of raising a child, is all that’s needed for Allen to commit to a long-term relationship. The three of them setup house in San Francisco and all seems to move along without a care, except that it’s the 80s and many of their friends are dying of AIDS.

Out of the blue, Allen takes a new job as an admissions officer at a prep school in Rhode Island, and it’s clear the move is because death is inching too close for comfort in the gay Mecca. Yes, Allen is HIV positive, and the move is him distancing himself from the dying.

While making a new life for himself and his small family (by this time Toby is a teenager), Allen’s nephew, Kit, comes to live with them as well. Together, as a loving family, they deal with Allen’s failing health in a touching and dignified way.

This is a story of family and love – the consuming love that grows from a family on the outskirts struggling with a vital disability – told from two different family’s viewpoints, Allen’s parents and Allen’s new family. It is a tapestry woven in vibrant detail with beautiful language.

I often felt that the children were the glue that held Allen and Jeremy together because so often Allen seemed to show more affection for Toby and eventually Kit. Allen’s relationship with each of the characters, including his parents, was sensitive and touching. It becomes a clear example that “alternative families” can be every bit as nurturing and loving as “traditional families”, even though they have different issues to contend with. Safe as Houses is a triumph in the gay parenting cause, and indeed, living with any disability.

What struck me most was that this family was able to create such a loving, cohesive unit in a world that refused to acknowledge their right to exist – somewhat reminiscent of an exquisite lily growing out of a muddy bog.

Safe as Houses is a book not to be rushed through. It must be read at one’s leisure, to wallow in the pleasure of glimpsing into this loving family. But read it one should, a delicate story that is superbly written.

Safe as House combined with his other novel, I Remember Tulum, has made Alex Jeffers one of my favorite authors, and I can’t wait to read more from this extraordinary talent.

Posted by AlanChinWriter at 1:46 AM