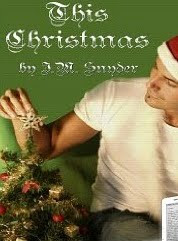 Ned Matthews is all alone this Christmas. All the other students, save one, have gone home for the holidays. But Ned’s parents are vacationing on a Caribbean cruise to escape the snow and sleet. The only other man left on campus is Bobby Cratchett, the boy Ned had a crush on all during high school, and who is even sexier now that they’re both in college.

Ned doesn’t mind missing Christmas with his parents, but the knife twisting in his gut is that his recent breakup with Jake, his now ex-boyfriend, has left him with nobody – no lover, no friends, no prospects, and no desire to get tied down with another loser. Hurt and bitter, Ned retreats into his hard, thick, protective shell and refuses to let anyone near, not even if they are sexy as hell and the only other man on campus.

Moments after waking he has Jake on the phone begging for a second chance, and Bobby at the door inviting him to come to his apartment for the night. What to do? How will Ned’s Christmas future unfold?

This is a smart, funny, sexy, poignant short story that often touches brilliance. It packs so much story and emotion into a meager thirty pages that I was left admiring the author’s exceptional skill.

This story is a gifted study in how to introduce a not-too-likable protagonist, and by the end of the story have the reader totally engaged and pulling for him. The characters and emotions are real. Anyone who has ever suffered a broken heart will identify with this main character. Indeed it sparked memories of bitterness long buried in me. I was touched.

I thoroughly enjoyed this read. It has a marvelous voice that is lean on description and fast paced. The author expertly nails the voice of a college-aged student.

I highly recommend this read. In fact, This Christmas is one of eight stories featured in J. M. Snyder’s So In Love, an anthology of contemporary stories celebrating gay love in its many forms. My only complaint about reading This Christmas is that I didn’t get to read the other seven stories in So In Love. But I can assure you, I will purchase the anthology and read them all. Bravo!!

Learn more about This Christmas at http://www.jmsnyder.net
.

Posted by AlanChinWriter at 1:16 AM