Book Review: The Judgment of Paris by Gore Vidal 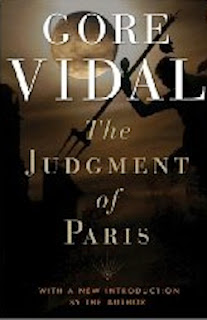 
The Judgment of Paris is an early work from the writer who used to be Gore Vidal, which is to say, I like it lots better than his later writings, which tended to grow increasingly ponderous, and especially bitter, as the years and the words progressed. But in 1952, he was still a young man, or young enough anyway to write with a young man's verve. The wit was there—he never quite lost that—but it became more acidic and less purely funny as time went by. This is, in fact, a very funny book, a farce, but of the best kind, in which we see the world as it is, through the eyes of a keen observer of human nature.

Philip Warren is a bit shy of 30 years old and just out of law school after a stint in the U.S. Navy. Much like Charley Mason in Maugham's Christmas Holiday (which this books resembles rather more than coincidence would suppose) Philip gives himself a year to tour postwar Europe, in the course of which travels, like Paris with his golden apple (though it is not his apple with which Philip entices his co-characters) he meets and becomes involved with three women, who tempt him variously with power, wisdom and love.

No, it's not exactly a gay novel, but, puh-leeze, this is Gore Vidal. Poor heterosexual Philip can scarcely turn around without tripping over a queen or two. Here, a handsome young hustler explains the facts of Italian life to Philip: "He talked a great deal, stating, as far as Philip could tell, that all Americans, English and Germans liked Italian boys, and even Italian boys, though they didn't make too great a thing of it, liked Italian boys."

This meeting occurs at a gay bathhouse, where—here is Vidal's twisted sense of humor at its best—Philip goes not for the predictable sex, which he knows very well is what he will find there, but to meet with a trio of somewhat deranged political conspirators intent on returning Umberto to the throne of Italy and so ending the postwar Italian republic. Chief conspirator Lord Glenellen insists on buying Philip one of the Italian youths on display, who turns Philip down because he's too young and too good looking. Oh, Gore, what a tease you were.

And here an intriguing aside on the pleasures of reading about sex:

"Now, part of the pleasure one gets from reading novels is the inevitable moment when the hero beds the heroine or, in certain advanced and decadent works, the hero beds another hero in an infernal glow of impropriety. The mechanical side of the operation is of intense interest to everyone. Partly, of course, because so few of us get entirely what we want when it comes to this sort of thing and, too, there is something remarkably exciting about the sex lies of fictional characters…one feels far more clearly engaged than one does in life where the whole thing is often confused and clumsy. Also, there is a formidable amount of voyeurism in us all and literature, even better than pornographic pictures, provides us at its best with an excitation occasionally more poignant than the real thing."

Despite some earlier successes (The City and the Pillar among them) this might be said to be the first true Gore Vidal novel, when at last he found a voice worthy of his talent. A delightful read!

Posted by AlanChinWriter at 1:51 AM