Pictures of Perfection by Reginald Hill 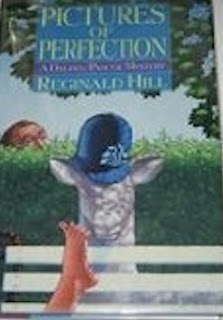 Like a number of British mystery writers, it seems to me, Reginald Hill is something of an acquired taste for Americans, notwithstanding that some of his Dalziel/Pascoe stories have been successfully transformed into television movies, I like them, the books I mean, not the least for the way in which he brings his repeat gay character, Sergeant Wield, into the plots without making much of an ado about his sexuality. He's out to his fellow officers, but in a very much ho-hum way.

I was surprised, however, to discover in PICTURES OF PERFECTION that Wield becomes pretty much the main character, and even seems to be, by book's end, in the way of a relationship. This strikes me as a bold move for an author of Hill's standing, whose audience, I feel sure, is somewhat a different one from Suzanne Brockman's. But I must quickly confess, I am far from having read all Hill's books (I'm trying to drag out the experience), and maybe he has done this elsewhere as well, in which case, I would be glad to hear of it.

Apart from the gay element, PICTURES is a most satisfactory read on all fronts - always assuming your cup of tea. I suppose it would be categorized as "an English Village Mystery" if there is such a genre, in so far as I can't imagine how it could be moved anywhere else. Indeed, the village of Enscombe is an important character in the book and by the time you've finished reading, you feel you know it well.

Young Constable Bendish, posted to the village, seems to have disappeared—or has he? Dalziel and Pascoe want to be sure he hasn't just gone a'fishing, and they send Wield to Enscombe to sort things out. What results is, as always with Hill's writings, witty and erudite. Nothing is what it seems, everyone has secrets, and The Fat Man (Dalziel) breaks rules and wind with equal ease. I find myself especially interested, as a writer, with Hill's legerdemain in describing his characters - he does, and he doesn't. I think I know, for instance, what Wield looks like - homely, it would seem. Or, maybe not. Other characters in the book clearly don't find him so, and when I go back to look, I can't find where Hill ever offered that description. He is a master at making you think he's told you more than he really has. Writing by insinuation, I suppose you'd call it.

Whatever you call it, however, it's masterful stuff, the kind of writing where you have to pause from time to time and go back over a line to savor it fully before you swallow and digest it.

Posted by AlanChinWriter at 9:16 PM

The author of alanchinwriter.blogspot.com has written an excellent article. You have made your point and there is not much to argue about. It is like the following universal truth that you can not argue with: A false statement does not imply truth or lack thereof (and this Truth is mathematically correct) Thanks for the info.