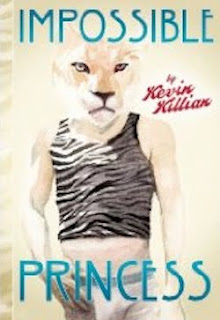 Impossible Princess is an anthology of finely crafted, edgy short stories that walk on the razor’s edge between camp and noir, exploring both the humors and bizarre sides of desire. There are ten stories, some written solely by Killian and some written by Killian with collaboration from others. The collection has five stories that didn’t appeal to me and five stories I found captivating, sexy, brilliant and a fun edgy ride.

The stories I was wild about are:

Too Far, written with Thom Wolf, is a riveting tale of a rock music groupie, who tracks down an eighties pop star now working as a DJ at a popular dance club. The groupie gets invited to the DJ’s house for a party and ends up in the DJ’s bed. But his fantasy-come-true turns into more than he bargained for. This story starts out slowly, but has some interesting characters. It steadily builds in tension until the Protagonist falls into one of the hottest and best written sex scenes I’ve ever read.

Spurt, written with Sylvia Plath, was perhaps my favorite of the collection. It’s the story of young man who is returning from the funeral of his college professor. He gets righteously drunk and then follows a sexy guy to a hotel room. As it turns out, the sexy guy is interested in more than vanilla sex – he needs bondage, pain, and a little body mutilation to enhance the experience. But like so many of these stories, things get out of hand and the ending is brutally surprising.

Ricky’s Romance, is the funny and weird tale of Ricky, an office working who is using the company copy machine to promote his own website. At night, while printing off his latest batch of promo material, the copier jams and, in an attempt to un-jam it, gets caught in the machine’s internal workings. Now caught, with his butt sticking up in the air, the janitor enters the copy room and mistakes him for the boss. What follows is hilarious. A very cute, fun, albeit unbelievable read.

Posted by AlanChinWriter at 7:00 PM