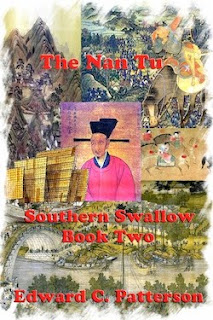 The Magical Adventure Continues
As a reviewer for my own glbt literature site as well as writing for three other review sites, I read a lot of glbt themed books. Many of these stories are cut from the same stamp, and I rarely enjoy them. Many are about sexy vampires and shape shifters and such, which doesn’t really twirl my skirts. Some deal with true life issues in such a way that touches me deeply, and I cherish those. But every once in a while a book comes along that has a unique voice, a fresh and vibrant set of characters, and has the ability to transport me into another world for an adventure far beyond my limited imagination. Tolkien certainly did that for me, as did Frank Herbert and Arthur C. Clark and several other fine writers. I recently experienced another such writer who took me on an adventure filled with history and magic and valor found in unexpected places. The author is Edward C. Patterson and the adventure is called the Southern Swallow series. The first book was The Academician, which delighted me with a rather touching love story. I’ve now read the second book in the series called The Nan Tu, which is the maturing of that love story into a tale of intrigue, loyalty and honor.

The Nan Tu takes the reader back into ancient China during the Sung dynasty, when the Emperor was considered the “Son of Heaven” and vast armies trembled at his every whim. Out of this rich history comes the journey of a few men who try to remold an empire out of the destruction and chaos left by warring hoards from the north, all the while being hunted by blood-thirsty bandits and The Jackal, who leads an army bent on their destruction.

One man, Li K’ai-men, must utilize the magic power of the Jade Owl to form an alliance between five men that will form a supernatural force to battle the enemy. Another man, Emperor Koa, must assume the responsibilities of The Son of Heaven, and somehow stay one step ahead of assassins and traitors long enough to form a stable government. A third, Fu Lin-t’o, the ever-faithful lover of Li K’ai-men, is challenged with keeping the Emperor’s court out of harms way. And, of course, K’u Ko-ling, Li K’ai-men’s rather clownish manservant, who has matured and become a key player in protecting the realm. There are rich descriptions of all the characters, each one bigger than life and easy to imagine.

This is a story about loyalty, duty and honor. Loyalty (and love) from scholar to his emperor, from servant to master, from lovers to each other, and from all to country and ancestors.

As with The Academician, this story is a vivid, imaginative, and often humorous romp through a pivotal point in Chinese history. Book II blossoms into a tense tale of intrigue, court politics, treachery and war. The plot is much more complex that the first book, and more interesting. It kept me up several nights, not wanting to put it down.

The narrator starts and finishes each chapter with his 1st person point of view, but the bulk of the story is told in 3rd person. I found these POV switches to be seamless, and greatly added to developing the depths of the main characters. This is a character driven story, and Patterson skillfully presents these characters with even greater depth than the first book with an excellent blend of tragedy and humor.

Because of the many different characters and locations, any reader would be greatly confused without first reading The Academician. Much like Lord of the Rings, this is one continuous story that spans several volumes, and needs to be read in order. It is not an easy read. There are so many important characters always appearing and reappearing, and so many different locations, that one needs to concentrate to keep it all in order.

The one issue I had with his book is that, because there is more story to come, it felt like the ending was flat. I was left with a feeling of incompleteness, and somewhat miffed that I must wait for another installment or two to finish the story.

The author’s consummate skill at crafting prose and his well-researched details kept me fully engaged until the last page. I would recommend this read to anyone who enjoys multifaceted characters, humor, and a well-crafted story.
For more about his book, press here.

Posted by AlanChinWriter at 11:54 PM