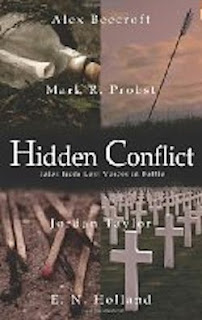 This quartet of novellas explores different perspectives of gay soldiers affected by war and violence. Four stories told by four different authors. Each story depicts a unique situation in a different historical setting, and each is told with a distinctive voice. These stories are not romances, although some have strong romantic threads. They are an interesting study of the issues gay soldiers and their loved ones face while serving in a military that blatantly discriminates against them.

My favorite of the four was Blessed Isle by Alex Beecroft, only because I’m a sucker for well-told sea stories. And sea tales set in the Age of Sails, like this one, are a particular favorite of mine. This yarn chronicles the last voyage of the British ship Banshee, which goes horribly wrong and ends in a mutiny. The result lands Captain Harry Thompson and his Lieutenant Garnet Litteton on a deserted island where a romance blossoms. Not a small thing considering the penalty for such relations was hanging from a yardarm until dead.
Even though the author’s rich descriptions and concern for detail often slows the pacing, the author keeps the story interesting while staying within the bounds of historical accuracy. Beecroft uses a rather cleaver device to alternate between two men telling the story, both in first-person. The contrasting personalities vying to tell the story adds interest and humor. These two characters are brilliantly drawn and kept me turning pages.

Mark R. Probst’s Not To Reason Why is set within Lt. Colonel George Armstrong Custer’s 7th Cavalry on the eve of their fateful rendezvous at the Little Big Horn. Corporal Brett Price and Sergeant Dermot Kerrigan serve together in the same unit. Brett develops a crush on his married sergeant, and the hardship of trailing the Sioux renegades brings them closer together – close enough for Brett to confess his feelings to his friend. He is rewarded with a single kiss of loving friendship, but in return must promise to care for Dermot’s wife should something terrible happen during the upcoming battle.
From the first few pages of his tale, the reader knows where it is going and what will happen. But regardless of knowing the outcome, this extremely well-written story kept me engrossed. It is a tale of comradeship, of two men with different kinds of love for each other, of the camaraderie between men trapped in a desperate situation. It blends touching intimacy with soldiers’ horseplay and horrific battle scenes. And believe it or not, the ending is both surprising and uplifting. My one trivial complaint is that the minor characters could have been more fully developed. That aside, the tight descriptions and vivid prose make this a touching and gripping story.

Two British soldiers on the Western Front of WWI are trapped in a bombed out cellar in Jordan Taylor’s No Darkness. Lieutenant Darnell is straight as an arrow, while the injured Private Fisher is gay. While waiting for a rescue which never comes, the two men pass the time by swapping stories of their past. There is no trace of romance between these two, but the private’s sexuality is made clear and they come to an acceptance, and eventually even closeness. They form a tenuous bond while digging their way to freedom, but of course, for some there can be no freedom. This is a dark, and yet fascinating tale.
In many ways I thought this the most powerful story of the four. I was fascinated by their gripping situation. Yet, it had a particularly fatal flaw. With both men trapped in darkness for most of the story, there was little chance for the author to describe the surroundings, or for the characters to have much action. The result was mostly dialog. Because of that, I felt the tension between the characters often fell flat, and the emotional connection just didn’t ring true, or at least it was completely overshadowed by the desperateness of their situation. Still, I couldn’t put it down.

The fourth and final story is E.N. Holland’s Our One and Only. Phillip spends a long weekend at the seashore with his lover Eddie before Eddie is shipped off to England during WWII. On the second round of D-Day, Eddie is killed. This story chronicles forty years of Phillip’s life after Eddie’s death, alone, desperately clinging to the memory of Eddie, and yet not being able to talk about that love to anyone. This story reveals Phillip’s depth of love, pain of loss, and the hardship of recovery. It also demonstrates the torment of having to keep all the grief bottled up inside. It is a moving, rather melancholy story. And although the story is depressing, it ends on a note of hope.
Although this is a compelling and interesting read that I highly recommend, I had two issues with it. The first is the author’s taste for minute detail, which often slows the pacing to a crawl. I felt that the word count could have been cut in half, and the result would have been a much more powerful story. My second issues was that, although Phillip gained my total sympathy early on, as the story progressed, decade after decade, I slowly became annoyed with him for not moving on with his life. Mourning for five or even ten years, I heartily sympathize. Fifteen or twenty years is pure self-indulgence. Forty years? I’m sorry, I lost all sympathy for him. I felt the author stretched a great idea too far. Still, I found the characters richly realized, the feelings genuine. I enjoyed the upbeat ending, and indeed the entire story.

Hidden Conflict is an intriguing exploration of gay men in the military. It is a book I will read again and again. I highly recommend it.

Posted by AlanChinWriter at 10:02 AM

Oh, thanks for such a great review, Alan! I'm really glad that you enjoyed it. I must admit I had a fun time having my two characters bickering lovingly in my head while I wrote. I'm glad that came across :)