Book Review: Men With Their Hands by Raymond Luczak 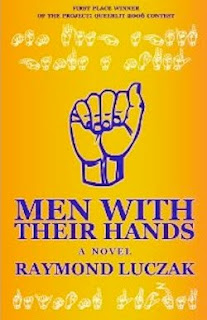 For the most part, this story follows Michael, who hears with the help of powerful hearing aids. As a teen in a special school, he copes with feelings of shame and inadequacy because of his growing interest in men, but also because his family seems ashamed of him for being deaf. They refuse to let him sign words with his hands, insisting that he try to be “normal”. So he struggles to learn how to speak properly. He soon befriends other deaf students who are proud of their ability to talk with their hands, and they teach him not only to sign, but to be proud of himself. He learns that talking hands are a thing of wonder and great beauty. Michael moves to New York City and falls into the gay scene during the time when AIDS was just becoming known.

At this point the story drifts. In New York, a close-nit group of gay deaf men regularly meet. They generally date hearing people, some are hustlers, most of them are dangerously promiscuous during a time when AIDS is rampant. The story follows Vincent, Lee, Eddie, Ted, Michael and Stan – some in first-person narrative, some third-person. Their stories are about fighting for acceptance, both from the hearing people and among themselves.

The last third of the story focuses once again on Michael, his dealing first with the lost of his lover and then going home to patch up relations with his family.

As with most stories that are structured to follow multiple characters, I had the problem of liking some and not liking others. I was most interested in Michael, so during the middle part of the story where it followed other characters, I didn’t find that nearly as interesting. I wanted the story to get back to Michael.

This is not an easy read. It is repetitious, with many characters who I found hard to keep straight. It jumps from first-person to third, past tense to present and back again. It follows several people, some interesting, some not. There were times when it felt jumbled, other times it seemed to wander aimlessly.

Fortunately, the story started and ended with Michael, who I found to have incredible depth and I found his story riveting. I won’t give away the ending, but after dealing with social acceptance, an uncaring family, the loss of a long-term lover, and a near death experience, Michael come to an ending I found very satisfying to his story. This is a story of finding your community, bigotry, losing loved ones to AIDS, and it ends on an uplifting note.

“Stop fighting yourself.” I sip from my glass of ice water. “Hearing people think that their real voices are inside their throats, but they’re so wrong. Their whole lives are their real voices, and it has nothing to do with how well they can hear or speak. Just how well they choose to live. Sometimes I think God made me deaf so that I could feel my own heart beating instead of forgetting to hear it like so many hearing people do.”


This was a touching and intimate look into the lives of a few deaf people. My mother is deaf, and I felt that this book gave me a better understanding of her and my relationship. In many ways I thought this story was wonderful, yet in other ways I found it muddled and confusing. It is a journey, however, both for the characters and the reader.

Posted by AlanChinWriter at 3:13 PM