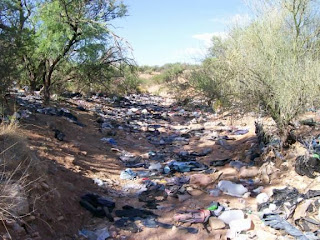 I recently received one of those spam emails that float around the net. It was sent from an in-law so I viewed the contents. It was originally sent by a woman in Arizona, showed pictures of clothing and backpacks littering a gully in the desert, and was being used to justify Arizona's new laws that allow police to pull over people of color and demand to see their papers. The just of it was: see how illegals litter our national parks, and they have no respect for out laws.
I responded to this email, pointing out that it was a weak attempt to justify the obvious bigotry festering in Arizona. My response was posted on several email lists, and I promptly received numerous emails that were basically personal attacks. I did receive two supportive emails, and I was so moved by one I asked the owner if I could post it here. He agreed. Please enjoy his response:
Alan,
I've been enlightened by the conversation going back and forth on Arizona and specifically about Mexico and its citizens. Unfortunately, from what I’ve gathered, some exchanges have become personal and hateful. My belief is that when people have to stoop to name-calling and making personal and derogatory remarks, they can’t support or justify their views and positions with valid arguments.

What people are forgetting is the new Arizona law, when and if enacted, does not specifically target Mexican-Americans or Mexican illegal immigrants. The people on your distribution list appear to be majority Asian and Asian-American. We and they are affected by this proposed law. Because asking people with "reasonable" cause for their papers, will not effect Mr. Straight White Conservative Republican. It impacts people who are different and it gives law enforcement, where a good number are racist, homophobic and sexist, carte blanche to stop anyone for "reasonable" cause.

This is discriminatory because we all know that the illegal immigrant from Sweden probably won’t get stopped because of a blown out tail light and will not cause alarm as much as if the driver was Mexican (legal or not), or dare I say, Black or African-American. Whenever laws are passed that only target a certain or specific segment of the population, all minority people should be alarmed. Proposition 8 is another example. Legal and constitutional experts said everyone should be alarmed that the State Constitution was amended to limit the rights of tax-paying and law-abiding citizens by a simple majority of the voters. As the late Dr. Martin Luther King said, if there is injustice to one, there is injustice to all Americans.

I am reminded of the following from Father Martin Niemoller:

First they came for the Jews

because I was not a Jew.

Then they came for the Communists

because I was not a Communist.

Then they came for the trade unionists

because I was not a trade unionist.

Then they came for me

and there was no one left

to speak out for me.

As an educated, open-minded, and gay Chinese-American with a vast and diverse network of friends and colleagues, I surround myself with people who don't rely on the blogosphere or have the "my way or the highway" attitude. These are people who can think for themselves and don't rely on talking points from radio or television commentators. Everyone I know is against this proposed law because we are singling out people, it does nothing to stem or stop illegal immigration, it doesn't protect our borders, and everyday citizens like you and me can and will be potentially stopped and we have to defend ourselves and our existence. These types of laws create animosity towards those it is targeting and provides justification to a certain mindset that it is okay to hate and possibly take physical action against them.

It's a sad state when so many assumed the worst about the people who left their backpacks, clothing, etc., in the desert. Think about it these people don't know that they are destroying a National Park. I doubt many of them even know what a National Park is. The National Park Service confirmed, “They are unaware they are crossing a national monument, a place dedicated to preservation for present and future generations.” Do people really think they've lugged a backpack clear across the border which probably contains their only possessions, just to dump it and move on?

The photos of the desert were taken by Lance Altherr, the Tucson Chapter Leader of the Minuteman Civil Defense Corps. He explained the prevalence of backpacks and clothing as follows:

“The illegals have walked over 25 miles into our country when they get to this spot. At this spot they can see the lights of Ammado (AZ), and they know they are within a few hours of getting picked up by the local vehicle which will take them anywhere in the country. When they come they carry backpacks with clean clothes and food in them; when they get to the layup spot, they change out of their dirty clothes and into clean clothes so that they will blend in better once they get to town. They will cram as many as 20 people into the cab of a pickup truck or 30 people into a van or SUV, so there is no room for any backpacks or extra clothing. We find a lot of brand new clothes and good backpacks which we donate to local schools.”

So, the discarding of backpacks and clothes, probably their only life’s possessions, is not because of a disrespect of our laws, but simply as a means of survival.

I remember hearing the stories told by my father when he arrived in this country of the prejudice and discrimination against him simply because he was different. He was Chinese and spoke very little English. I’m certain a lot of the people on your distribution list suffered these same cruel actions, or their parents, grandparents, etc. The lack of compassion and empathy are disheartening to say the least. History shows that when we as a people who have suffered, overcame obstacles, and become successful, forget about the past. In other words, we think we have arrived and we are one of “them.” That’s fine and dandy but I hope people are ready for a rude awakening, because it will happen. We all can be knocked down so quickly and easily with a “Chinaman,” “Chink,” or “Faggot.”

Lastly, there are reasons why these types of communication are sent and forwarded, especially when incomplete and inaccurate information are given. In this case, it may have been the best of intentions, but It’s typically self-serving and usually because of a personal agenda. It serves no useful purpose, it doesn’t benefit anybody, and It hopes to keep mistruths and lies as real as possible…after all, the more something is repeated, and the more people hear it, the truer it becomes. President Obama being born in Kenya is a good example. It is shameful that others keep this and other “articles” alive, without verifying the accuracy or completeness, and blindly forwarding it to others. Before the advent of the PC and the worldwide web, we always made sure we had our facts before we talked to someone in person, on the phone, or via snail mail. I think we all owe it to family, friends, and colleagues to speak the truth via the internet also.

Posted by AlanChinWriter at 12:50 PM

I'm saddened by what I see as a rising tide of intolerance, racism and hate and I don't know how to fight it. The loudest voices are heard the most, and more often than not they are the ones shouting about hate. I hope these recent events are aberrations, but I fear they are not.

Thank you for posting this, Alan. And thanks to Mr. Woo for writing it. Sadly, I agree with P.A. Brown. Things have become ugly in the so-called "Christian" nation. The nice name is polarization. The true name is intolerance. I, too, hope it's an aberration and fear it is not.

Just think. If the Native Americans had been foresighted enough to have such an immigration policy, most of us wouldn't be here.

It always amazes me how quickly people forget we're all immigrants. And most likely their ancestors were reviled as encroaching -- no Irish, no Jews, no Italians, no Greeks, no anybody who isn't exactly like ME need apply. These people are so full of hate they're pathetic and I'd feel sorry for them if they weren't also so dangerous.

They find it so easy to blame immigrants for all the employment problems, though in fact illegal immigrants only take jobs that no American will take, since it pays too little and gives no benefits or protection from dangerous work conditions -- and the employers exploit that even while they funnel money into hate legislation and racist politicians.