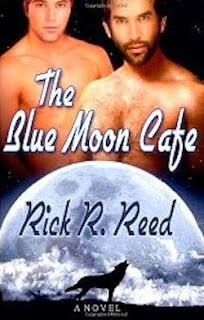 Thad Matthews is between jobs, between boyfriends and trying to pull his self-esteem out of the gutter in Seattle’s gay neighborhood, Capitol Hill. But he has to be careful during his nights out clubbing to find a new love/lust interest because there have been some gruesome deaths in the area, gay men mutilated and half-eaten, and it always seems to happen during a full moon.

When Thad decides to try the new Italian restaurant that opens near his apartment, he encounters more than great food and an authentic Italian atmosphere. He meets the proprietor, Sam Lupino, the man of his dreams. Sam has recently moved to Seattle from Sicily, and his family has opened the Blue Moon Café. Sam is large, rugged, hairy, and an aggressive lover. But regardless of how forceful Sam is in bed (which is fine with Thad), he exudes kindheartedness out of bed, and seems as taken with Thad as Thad is with him.

Thad and Sam’s relationship turns rocky, however, when Thad suspects Sam is hiding something, and it has to do with the fact that once a month Sam disappears for days at a time, which seems to coincide with the murders. Thad begins to suspect that the man of his dreams is a werewolf, but that’s ridiculous. Isn’t it?

Let me state that I’m not a fan of werewolf, vampire or shape-shifter stories. To my thinking these types of tales, for the most part, have become a tired cliché. That said, The Blue Moon Café drew me in from the get-go because of the characters, particularly the protagonist, Thad Matthews. Thad is jobless due to the economic downturn. He kicks around Twitter and Facebook during the day, and the gay clubs at night, trying to overcome his vast loneliness. Sam, on the other hand, is mature and stable but he has family secrets. He is put in a position where he must choose between love and protecting his family. Both main characters dealt with universal themes that I could easily identify with.

There are also some particularly tense and well-written scenes from the werewolf’s point of view while stalking its prey. Reed takes you into the killer’s psyche, and you feel its need, not only to feed, but to relish the terror it causes. Reed knows how to build suspense and keep the reader hanging on the edge of his/her seat. There were parts I couldn’t read fast enough to find out what would happen next.

My only complaint is that I walked away slightly disappointed. The only other Rick Reed story I’ve read was Bashed, and I was very impressed with that book, for both characters and plot. So I picked up The Blue Moon Café with high expectations, and as much as I enjoyed this read, I didn’t think it lived up to the promise that Bashed created.

For more information about this book or author, press http://www.rickrreed.com/

Posted by AlanChinWriter at 4:40 PM