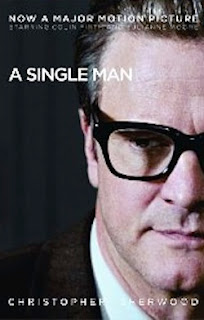 A Single Man is a day in the life of George, a man who recently lost his male lover in an auto accident. From waking up, to having breakfast, to driving to work where he fantasizes and converses with co-workers and students as he goes through his day as an English professor at a state college in Los Angeles. While George steps through his routine, the ghost of his dead lover, Jim, flits in and out, a constant reminder that no matter how many people George surrounds himself with, he is still alone. George is an outsider. He is British living in L.A., gay living in a heterosexual world, brilliant among dull students and colleagues.

George’s day is simple and routine; however, the author creates a rich and complex text where the reader is able to become the protagonist. The reader experiences George’s debilitating loneliness, his anger and resentment with society, and the walls he keeps between he and his “friends”.

I decided to read this novel before seeing the recent movie. But I can say with candor, that I no longer want to see the movie, because I’m afraid that it will in some way spoil the special feelings this story left me with.

It is a marvelous read, and surprisingly contemporary, considering it was published in 1964. And in an age when most gay novels focus on young, good-looking studs, it was refreshing to read about a gay man in his fifties, struggling with life issues we will all face one day.

I loved the opening, it is so Zen. I’ll give you a taste of it here:
“Waking up begins with saying am and now. That which has awaken then lies for a while staring up at the ceiling and down into itself until it has recognized I, and therefrom deduced I am, I am now. Here comes next, and is at least negatively reassuring; because here, this morning, is where it has expected to find itself: what’s called at home.”

This is the first time I’ve read this book, but I know I will go back to it time and again, like a lover one re-discovers, and with each discovery one falls deeper in love.

Posted by AlanChinWriter at 6:49 PM