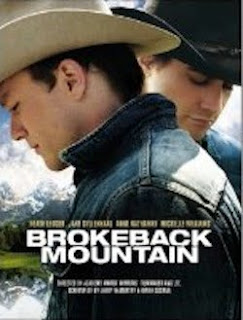 Reviewed by Alan Chin
Published by Edinburgh University Press
Pages: 140
American Indies is a series of books discussing contemporary American films that have found commercial success but have not been constrained by the formal and ideological parameters of mainstream Hollywood. This volume explores Brokeback Mountain, the short story by Annie Proulx and the film directed by Ang Lee, and combines original research and a classroom-oriented analysis of the film.

The book is broken into four major themes that discuss in detail the following topics:
1. An overview of independent cinema vs. Indie films.
2. Analyses how/if Brokeback Mountain fits within the enduring historical genre called the Western.
3. Analyses Brokeback Mountain as a melodrama, examining the film’s relationship to concepts of pathos, backward feelings and passivity.
4. Propose a new way of thinking about gay spectatorship.

I'll be frank, this is not a book that will appeal to many outside the boundaries of serious film students. It goes into excruciating detail about everything you never wanted or needed to know about Brokeback Mountain. I say this because, as a screenwriter and the author of two scripts, I consider myself a serious student of film, and still I was literally bored to tears with every section within this book.

I’ll include the following excerpt to give a flavor of the work:

What Brokeback Mountain actually offers is a competent illustration of Sedgwick’s argument in Epistemology of the closet as it complements the troubled binary that has framed the Western’s initial formulation. Like all genres, the Western is by definition an episteme in that it engenders the production, constitution and reception of forms of knowledge.

Like I said, this is not an easy book to read or understand. I will not go into detail about the contents of each section, except to say that with each topic, the author delves to unheard of depths to make his points. For example, the last chapter, roughly twenty-five pages, analyses 45 seconds of film (six shots) in which Jack Twist and Ennis del Mar simply glance at each other. Little action, no dialog. The author points out the two were cruising each other, yet he needed twenty-five pages to make his point.

I believe I learned much about film-making and film editing by reading this book. And I believe any serious student of film will benefit from this read. I cannot, however, recommend this book to the average reader.
To read more about his book, press here.

Posted by AlanChinWriter at 1:17 PM