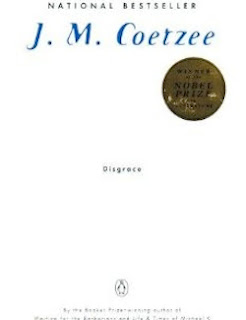 At fifty-two, Professor David Lurie is a disillusioned, womanizing, burnt out professor of Literature at a university in Cape Town. He is divorced, driven by desire, but lacking in passion. When his impulsive affair with a young student becomes known, he is stripped of his job, shunned by all who know him, and ridiculed by his ex-wife.

He makes a hasty retreat to his lesbian daughter’s, Lucy, small farm in South Africa. The visit becomes an extended stay as David struggles to find meaning in his last remaining relationship. But a violent attack from hoodlums force father and daughter to confront their strained relationship, and the equally complicated racial complexities of post-apartheid South Africa. David, in an attempt to protect his daughter, finally finds a cause to become passionate about, but will it do him, or anyone else, any good?

This story is not what I consider glbt themed, even though the main supporting character is a lesbian. There is a plot thread of David coming to grips with Lucy’s sexuality, but it is, however, a minor thread. The stronger plot threads are these two characters’ bond with each other, their relationship to the people of South Africa, and David’s dealing with his own snarled morality.

This is such a brilliant and powerful story, told with a remarkable degree of tenderness, that I couldn’t put it down. The characters are complex, compelling, and completely real. The setting is as interesting as the main characters. I’m not at all surprised that it won the 1999 Booker Prize.

Coetzee’s writing is precise and sparse. He shows rather than tells. He pulls the reader into the story to live it, rather than read about it. It is a very human story, about human frailty, mistakes, and sins. And it is all too real because there is no easy conclusion, no painless redemption. It is an honest portrayal of a “fallen” man in a brutal country who must somehow go on living.

I highly recommend this story to anyone who enjoys powerful writing at its best.

Posted by AlanChinWriter at 6:01 PM