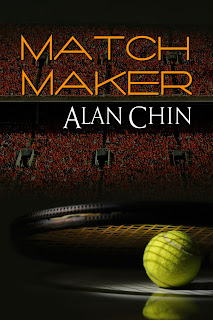 Reviewed by Bob Lind, Echo Magazine
Published by Dreamspinner Press
Pages: 328
The revelation that they were a gay couple forced Daniel Bottega and Jared Stoderling off the professional tennis circuit four years earlier. In the interim, Daniel was marking time as the tennis pro at a quiet country club in San Francisco, while Jared pretty much crawled into a liquor bottle to drown his crushed dreams. When Daniel is approached to train Connor Lin, a promising young prodigy whose tennis game needs focus, he decides to gets Jared involved as well. Besides getting Jared off drinking, it reawakens both of their spirits of competition. Jared goes from just helping Connor workout to being his doubles partner, and both begin to move up the ranks on their singles tournaments.

When the press covering one of the midlevel tournaments gets tipped off about Daniel and Jared's relationship, it results in rumors that Connor is gay as well (He isn't), and the trio experience bias from homophobic judges as well as receiving threats of violence. Determined not to quit again, they continue to compete, supported by good friends and Connor's second generation Chinese-American family. As if the pressure of competition and the homophobia wasn't enough to deal with, all three suffer physical and emotional obstacles that threaten to shatter their dreams.

In a word ... Wow! After reading his previous two novels, I expect outstanding writing from Mr. Chin, but this raises the bar far above any expectations I had. The story will remind you a bit of the gay classic "The Front Runner" in its intensity and "we VS them" conflicts, but I believe the story and characters are even more realistic and relatable here. It's the rare novel you may want to read numerous times, and is a great gift for anyone facing adversity. Beautifully and skillfully done, I give it five match point stars out of five. Bravo!

Posted by AlanChinWriter at 2:11 PM