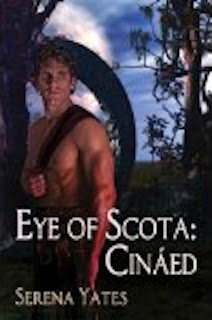 The one thing that keeps the priests in power and the planet’s population from slipping into moral decay are the magical Slanach Stones. But when it becomes apparent that the current horde of stones are losing their healing power, The High Priest of Dalriata sends a young priest, Cinaed MacAlpin, to a distant land to gather more stones.
Cinaed’s quest leads him to the mystical Eye of Scota, a portal through space that links with Stonehenge on Earth, and the supposed source of the Slanach Stones. But instead of finding more stones, Cinaed finds Tadeo Banderas, the captain of a space ship from earth. Tadeo has been marooned on this planet, and is near death from an animal attack. Cinaed uses his only healing stone to bring Tadeo back to health, and in so doing, falls in love.
Through the Eye of Scota, Cinaed discovers that there is no need for more stones, because any depleted Slanach Stone will regenerate its power when a healing priest and a warrior, who are soul mates, physically bond. Thus, the only thing that can save the planet is the one thing the Council of Priest forbids under penalty of death.
Cinaed’s quest, with Tadeo at his side, turns into a pursuit to convince his own government to allow, even encourage, homosexual bonding.

I confess I have little experience with either Sci-fi or fantasy, and this story has elements of both, so I don’t know how this tale compares with others in the same genre. It is a light, fun, fast paced, delightful read. It is well written and often touching.

I found the character’s situations and their mystical world rather creative and interesting. The sci-fi elements were well conceived, but I felt the author holding back. For instance, the Eye of Scota is a portal to Earth, and I kept expecting someone to use it to travel to Earth, but that portal was never used. Instead it became an all-knowing voice with plenty of attitude. Another example was Tadeo’s phaser gun, which would have come in handy in the second half of this tale, but was somehow forgotten about.

The main characters are certainly likable, but didn’t have the kind of depth I generally look for in fiction. That could be because the characters’ internal arcs didn’t develop as they worked their way through the external challenges.

The issues I mentioned above are trivial, and didn’t take away from my enjoyment of this story. The one complaint I have is that the story felt a bit rushed. I saw numerous opportunities where the author could have expanded the story or gone into more depth, but chose not to. It seemed to me that situations were too quickly gotten into, but more importantly, too quickly resolved. I feel that this story could have easily been expanded into a much more satisfying read.

Still, that aside, there is much enjoyment to be had following these two lovers as they attempt to battle an established religion to bring about sexual freedom and equality, and save their world from decay. I walked away from this book hoping that the author has a sequel up her sleeve. I can recommend this book to anyone who enjoys highly creative tales.
To lean more about this book or its author go to www.serenayates.com

Posted by AlanChinWriter at 11:15 AM