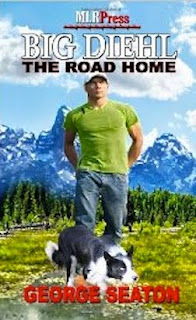 After six years of service to his country, during which he saw combat duty in Iraq, Big Diehl has received his discharge from the Army and is headed back to Wyoming. His only goal is to confront his father for the repeated molestations he suffered as a boy. But before he can even things with his old man, Diehl finds himself in the center of a homicide investigation and on the run from the law. When it looks like his “adopted” family in Casper can’t help him, he is comforted by a stray dog, who turns into a true friend. Can Diehl resolve his issues and pick up life where he left off six years earlier? Possibly, but that road home is a long one, with plenty of blind curves.

I happen to think that George Seaton is a very talented writer. I thoroughly enjoyed his first novel, Big Diehl. And although I liked this sequel, The Road Home, I had a number of issues with it, so I’ll get them out of the way up front.

The thing I was most surprised with, was the extensive back story. I expect a sequel to give some back story to set the scene and remind me of a few plot points of the previous work, but this back story droned on for over a hundred pages, recounting everything that happened in book one. Since I had read book one, I found the recap boring and unnecessary. Even for someone who had not read book one, this back story was, in my opinion, not needed, because the author gives plenty of back ground while he tells the current story.

This author has a wonderful and unique voice. His slow, country-twang voice alone puts the reader in the Wyoming territory. But I found myself getting annoyed at phrases that kept popping up over and over and over. I lost count of the times he mentioned “six years” and “tin house” Those and others felt like a mantra popping up every other page. At one point during a bar scene, the author used the term “tipped his drink to his lips” four times on four consecutive pages. These repeats pulled me out of the story each time I tripped over them. That, along with other minor issues with the text, made me think that the prose was not as polished as the original Big Diehl.

The last negative I’ll mention is that this story centers around a homicide, which brought a great deal of tension and suspense to the story, and was good. It really peaked my interest. Yet, I felt that the resolution to the crime came too early in the story and was too easily resolved. It left me slightly disappointed.

That all said, I can whole-heartedly recommend this book to all readers. As I’ve stated above, Seaton’s voice is a joy to read, and the story and characters kept me turning pages well into the night. This is a story about love, and family, and even the bond between humans and animals. There are so many touching scenes that are handled with consummate skill. The characters pull the reader into their issues, their hopes and desires, to the point where the reader is not sure how s/he wants the story to end. This is a worthwhile read for people who place integrity and family above everything else, but by all means, feel free to skip the first hundred pages.

Posted by AlanChinWriter at 4:33 PM