Book Review: The Boy Behind the Gate by Larry Jacobson 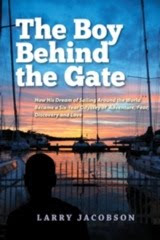 As a seven-year-old boy, Larry Jacobson often stood outside the gates of the marina near his home in Oakland, California, staring at the sleek sailing yachts nestled in their births, and dreamed of sailing the seven seas. His fantasy, even at that young age, was to circumnavigate the world. That aspiration remained dormant, wrapped in a cocoon for over forty years, waiting, waiting, but always pressing on his heart. The Boy Behind the Gate is the nonfiction account of the author fulfilling his life-long dream.

This is not simply a sailing story of shimmering white-sand beaches, tropical lagoons, and exotic ports of call. It is the hard and gritty sea tale of overcoming fears and insecurities, of dealing with the harsh and glorious displays of nature, of facing loneliness. This is a story of a gay man who risked everything for uncertainty and adventure, and in the process, reinvented himself. It is an account of personal strength and perseverance. Oh, and did I mention love? Yes, this is also a gay love story, not only of Jacobson’s love for the sea, but also his falling in love with Ken, his first mate.

On December 7th, 2001, Larry Jacobson walked away from a successful career and a long-time lover. He, his first mate, Ken, and a skeleton crew boarded a fifty-foot sailing yacht, Julia, stowed their provisions, made last minute preparations, waved good bye to friends and family, sailed under the Golden Gate Bridge, and pointed the bow south. They would not see that beautiful orange span again for another six years.

Jacobson had never captained an ocean going vessel before leaving the safety of the west coast of Mexico to cross the Pacific. He was not prepared for what lay ahead, but the unrelenting ocean served as teacher and guide, humbling his ego one minute, inspiring him the next.

Most of the entries of this book are presented as entries from the author’s personal journal and also emails written during the voyage. Don’t expect beautiful prose or lofty accounts of exotic cultures. These are gritty entries of a sailor and adventurer. The author’s mood comes through with each entry. The reader definitely gets his frustrations, fear, loneliness, his surprises and joys.

As a fellow world traveler (although I cross oceans from thirty thousand feet) I found this account fascinating. Jacobson describes many places I have visited, and his descriptions and insights are spot on. He managed to take me back to those destinations and let me relive my experiences there, from lagoons on Bora Bora, to the beauty of New Zealand, to diving the Great Barrier Reef, to the temples of Egypt, and the bustle of Istanbul. I thoroughly enjoyed his accounts of places I’ve been and others I hope for visit.

I only had one issue with this book. While Island hopping across the Pacific, the author seems to fall into a monotonous pattern of describing a fantastic island paradise, then a mechanical breakdown that impends the trip, then a horrendous storm that threatens their lives, then starts the pattern again with a tropical paradise. Not that it’s dull, but he does this multiple times, and, for me, it got too repetitious. And speaking of mechanical breakdowns. In the six-year voyage, everything that could possibly break did. I felt the author dwelled too much on his frustration of these incidents, and felt he could have cut half of them out and still made the point of how frustrating a journey like this can be.

The following is from a poem by the author taken from the book:
I have stood at the edge
Of the oceans.
I have stared in awe
At the power before me,
That pulled and tugged,
Until there was only the sea.
I left my life behind
To become a wanderer.
To explore, to live on the edge,
To search for something.
For that one thing that could satisfy
The urge that comes over me,
To keep moving, to wonder, to see.
I have circled the globe,
Sailed the seas,
Stared into death’s eye.

This tale is more than one man’s account of finding himself. This is a roadmap to finding one’s dream that anyone can follow, no matter what your particular desire is. It will also motivate readers to follow their own dreams at all costs. I can highly recommend this book to anyone who has ever imagined doing something great, something others fear, something that presses on their heart.

To lean more about the author and his book, go to larryjacobsonauthor.blogspot.com

Posted by AlanChinWriter at 10:00 PM