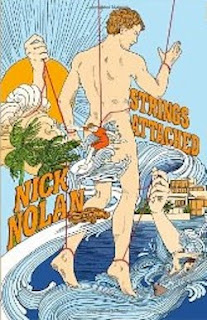 When his mother is sent to rehab for alcohol addiction, closeted teenager Jeremy Tyler is sent to live with his dead father’s relatives. In a matter of a few days, he goes from poverty in Bakersfield to the posh world of Ballena Beach. While struggling to fit in, Jeremy joins the high school swim team, dates a popular girl, and begins to think he’s landed in paradise – until is great aunt Katharine begins to make demands, playing him like a puppet. Then a mysterious phone caller insinuates that his father’s accidental death was no accident.

As Jeremy grows accustomed to the lifestyles of the rich and famous, so grows his curiosity about his father’s death. What he doesn’t realize is that the closer he comes to the truth, the deeper in danger he falls. He must race to unravel the clues before he meets his father’s gruesome fate.

This is an enchanting story. It moves well even though I felt the author went into much more detail than the story needed. It weaves a murder mystery, sexual ambiguity, and characters with hidden identities and agendas into an entertaining tale.

I feel that the closer the reader is to the late-teen/early-twenty target audience, the more enjoyment they will find in these pages. Not simply because this is a coming-of-age tale, but also because that age group won’t mind the thin characterization of the cliché characters. However, there are a few sexual scenes that take it out of the realm of the typical YA novel, which I felt was a mistake on the author’s part. Better to have toned down those scenes for a younger audience, in my opinion, because neither the writing nor the plot is strong enough for a more sophisticated audience.

What made this story for me was the character of Jeremy. Thin, yes. Cliché, yes again. But his youthful confusion, mistakes, yearning and wise cracks are charming and delightful, and carry the read through any shortfalls of the storyline.

I don’t feel that the author’s attempt to emulate the Pinocchio theme is well integrated, but frankly, it doesn’t matter. This is a gay boy’s coming of age yarn, with a somewhat darker tones that I’m used to seeing, but even with these opaque shades, the author keeps the tone light and moving, which makes for an enjoyable read.

Posted by AlanChinWriter at 1:28 AM