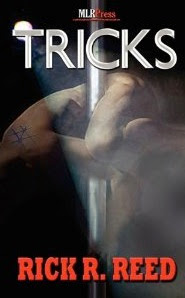 Arliss had a lot to be thankful for. He had managed to escape the small, nothing of a town and his abusive parents with no more than the clothes on his back and the price of a bus ticket. Now he paraded his sexy, near-naked, twenty-two-year-old body in front of a packed house at a strip club in Chicago’s infamous Boystown neighborhood. He had money in his pocket and was in high demand, burning the candle at all ends. But as thankful as he felt, he had a dream of moving beyond the groping hands and hungry stares at the strip joint. With his limited education, he felt his big break could only come from the male-porn industry. He wanted desperately to become a porn star.

Sean didn’t know what had prompted him to enter the Tricks strip club that night. He had recently broken off the relationship with his lover, and loneliness had driven him from his apartment. Being an intellectual and old enough to have become sedate, he didn’t approve of such places, but he needed to have people around him, to be part of a crowd. Then a dancer – young, hung, gorgeous, with an innocent smile – made him forget his loneliness, and everything else for that matter. His lust erupted, and his embarrassment forced him to flee the club.

Hours later, sulking near the lake shoreline, Sean looked up to see that same stripper. The boy introduced himself as Arliss. Loneliness had driven them both to the same spot, or was it fate?

This is an opposites attract story, which may sound familiar – at least it did to me. What is not familiar is the way the author draws you into each character, and makes you feel their longings in your gut. Mr. Reed has a keen insight into the loneliness and hopes and insecurities that drive people, and he shows off his talents with this story.

The outward plot is not a complicated one, but the inner journey these characters trudge as they traverse the pitfalls of an older/younger relationship is both complicated and hypnotic. The author not only pulled me into the story, he made me believe I was both characters, needing to abandon the harsh world and merge to become whole again. It was a very emotional journey.

Posted by AlanChinWriter at 11:45 PM