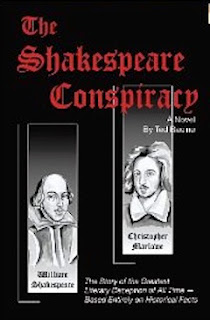 The Shakespeare Conspiracy is a historical novel that unravels two mysteries, and then weaves the pieces back together to reveal what could be the most scandalous deception in the history of literature.

Mystery #1: How could Chrisopher Marlowe, England’s foremost playwright, be suspiciously murdered and quickly buried in an unmarked grave only days before he was to be tried for treason?

Mystery #2: How could William Shakespeare replace Marlowe as England’s greatest playwright virtually overnight, when Shakespeare had never written anything before and was merely a little-known actor?

Did Shakespeare really write all those fantastic plays, or did he have a ghostwriter by the name of Christopher Marlowe? Read the book and decide for yourself.

I must admit that the author wheels his facts like a sword to make a pretty convincing story of how Christopher Marlowe faked his own death to escape the hangman, and then with the help of his benefactor and lover, continued writing plays that William Shakespeare took credit for. But Bacino not only presents a convincing theory and backs it up with facts, he tells an interesting, exciting and funny love story that is full of plot twists. It is an amazingly fun read.

The premise and the characters are deliciously unique. I especially like the way the author paints Shakespeare as a buffoonish rogue who doesn’t know a comma from a camel. The love story that unfolds between Marlowe and his benefactor, Thomas Walsingham, is both touching and inspiring. There is much to love about this story.

Set in 16th Century Elizabethan England as the Black Plague ravages the country, these characters traverse grand country estates, the underbelly of London, the torture chamber of Bidwell prison, as well as a seven-year manhunt across Italy. It is a tale of murder, mayhem, loyalty, and love. The author presents what I believe to be an accurate glimpse of the political strife, religious supremacy, and gay society of the time.

Within the first few pages, it became clear to me that his novel was adapted from a screenplay. The whole book reads like a screenplay, which means there is little delving into the characters’ heads and hearing their thoughts. This is one of the few books I’ve read that could benefit from a little more telling rather than showing. Although I must say that as the story progressed, the writing continued to grow stronger. There were a few minor holes in the plot, but they were easily overlooked.

One thing that struck me was the historical accuracy. Bacino has done his homework well, and even includes fifty pages of supplemental notes and historical data to support his argument. There is also a number of comparisons between Marlowe’s and Shakespeare’s writings that are too numerous and too telling to ignore.

The Shakespeare Conspiracy is a fast, fun, engaging read. I highly recommend it to everyone who loves a good, eye-opening romp through history.

For more information about the author or his book, go to www.theshakespeareconspiracy.com
.

Posted by AlanChinWriter at 6:15 PM