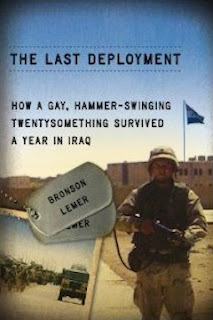 How a Gay, Hammer-Swinging Twentysomething Survived a Year in Iraq

Bronson Lemer joined the National Guard during his senior year of high school as a way to help pay for his upcoming college expenses, but he also had a secret reason for joining. For years he had lived in the shadow of his more athletic brothers, and because Bronson was gay, he felt the need to do something dramatic to prove to his parents that he was his own man. He wanted to make the family proud of him. He chose the National Guard because he assumed he could do his one weekend a month and never be sent to war. He was wrong.

In 2003, after being trained as a carpenter and serving five and a half years in the North Dakota National Guard’s engineering unit, Bronson was deployed in Iraq for a year. He left behind college, his family, and a lost love. He found himself in a war zone that he and his fellow soldiers called ‘The Sand Box’ – living in tents, sand everywhere you looked, 120 degree temperatures, and constant apprehension about the impending dangers.

Bronson spent a year in and around Bagdad using his carpentry skills to help rebuild the city. He had a deep conviction to aid the Iraqi people, but the longer his deployment stretched out, the more he felt the US military was doing more harm than good. On a more personal level, he struggled because of a lack of support structure. He didn’t have the close family ties, a wife or long-time girlfriend that most other soldiers had. He felt a need to reveal his sexuality to his buddies, so that they would understand him. But, of course, he couldn’t do that. His only release was in the form of letters to his lost love.

The Last Deployment is a well-written, often provocative memoir of the author’s struggle to reconcile military brotherhood with self-acceptance. If you are looking for gun battles and roadside bombs ripping limbs from bodies, then you should keep looking. The author never came under fire. This is a tale of internal struggle and the absurd nuances of a soldier’s life in the ‘Sand Box’. It is more about loneliness, fear and fitting in than guns and battles.

The author spent very little time talking about the ‘Don’t Ask, Don’t Tell” policy. I recall only one place where he summed up his views about it as: The policy creates an environment where it is OK to ridicule someone because of their sexuality because gay men and women cannot stick up for themselves or others without fear of being ostracized and outcast, and that is the last thing a soldier wants during a deployment. The policy reinforces ignorance and stupidity by forcing the people who are gay—the ones who would speak up and support gay men and women when others were ridiculing them—to keep their mouths shut. It also stifles a community that cannot grow, trust, or support each other because some of the members aren’t allowed to speak up or express who they are.

Being a gay man who spend four years in the navy, I was also surprised that Lemer didn’t talk about falling in love/lust with any of his fellow soldiers. That was one of the hardest things for me to deal with while in the military: feeling love for my buddies but being unable to divulge it in any way. What Lemer does express repeatedly was a feeling of not fitting in, mainly because he had to hide so much of himself. Now that was something I related to perfectly.

Lemer's chronicles of a soldier’s daily life in the ‘Sand Box’ make for an interesting and poignant read. It is also a strong argument why the "Don't Ask, Don't Tell" policy harms morale, rather than doing any good. Regardless of how you feel about the war, this memoir is well worth reading. I can highly recommend it to all readers.

Posted by AlanChinWriter at 10:44 AM