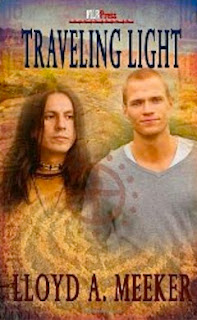 
Ian McCandless is a gay hospice nurse in training to become shaman. On orders from his mentor, Ian goes home for the holidays to make peace with his estranged family. Ian’s brother, Will, picks him up at the airport, and the old conflicts bubble to the surface before they can exit the parking lot. On the way home, Will interrupts a convenience store robbery and is shot, dying in Ian’s arms. Ian vows to use his shaman powers to reap vengeance.

In 13th century Anasazi, another shaman apprentice, Ta-Kuat, is given the task of journeying through the spirit world, through time and space, to retrieve the magical Door Stone which will free his village from famine and will allow them to live and prosper.

As Ian enters the spirit world on his hunt for revenge – which is forbidden to shamans – he meets up with Ta-Kuat. Ian’s pursuit not only puts himself in conflict with the spirit world, but it also endangers Ta-Kuat. The two apprentices forge an unholy alliance in the spirit plane that has dangerous ramifications in the physical world.

Lloyd Meeker’s debut novel, Traveling Light, is a winner. This is one of the most delightful and imaginative stories I’ve read in years. This paranormal tale weaves time travel with dabbling in the spirit world, unique spirits who guide or hinder, and wise old shamans who expound spiritual wisdom without making it into a sermon. In short, it is a unique and absorbing read.

This is the story of two seekers who span both the spiritual realms and the physical world in order to find what they think will make them whole. Ian seeks justice for his dead brother. He searches for his brother’s spirit, and plans to harm his brother’s killer. What he doesn’t realize, and what his mentor must show him, is that, for a shaman, there is no such thing as justice. Ta-Kuat, on the other hand, seeks to save his people by finding the Door Stone. He travels time and space searching for something that doesn’t exist, because it was conjured in the mind of an impure soothsayer.

The two meet on the spirit plane, and are drawn together by a need to help the other, but then both are pulled into a growing love that spans supernatural dimensions. And yes, they manage to make love in both the physical and spiritual planes. “He couldn’t bear his own ecstasy, yet knew it without effort, just as he knew Ta-Kuat’s. They formed one being, one matrix of power, one undulating wave on the vastness that lifted them, drowning them. “

It is a complex plot played out on several levels. Between bouts of lovemaking, the apprentices must help each other unravel riddles and mysteries. They must battle internal emotions gone mad, and evil shamans. By the end, they uncover universal truths that each of us, in the empty and lonely parts of our lives, must confront. I walked away from this book feeling a little wiser. I don’t see how anybody wouldn’t.

My one minor issue is that I wanted the author to spend more time developing the supporting characters who appeared in the physical world. I was particularly keen on having both shaman teachers, Ang and Chiyuskanek, take a larger role in the story and reveal more of themselves.

That one issue aside, I felt this was a delightful and mystical journey, both for the characters and the reader. Utterly enjoyable. I can highly recommend this book to all readers who like to tickle their imaginations.

Posted by AlanChinWriter at 5:57 PM

You have a fabulous blog! I want to award you with one of my homemade awards: Brilliant Writer Blog Award for all the hard work you do!

I invite you to follow me since we have a lot in common, but no pressure. I’m not giving you the award just so you will follow me. You really do deserve it!
Take care:-)

Go to http://astorybookworld.blogspot.com/p/awards.html and pick up your award.
~Deirdra