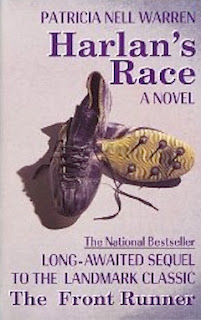 Years after the shooting death of Billy Sive, Harlan Brown is faced with the arduous task of coming to terms with the loss of his lover. While trying to be a father to Billy’s son, Vince Matti (Billy’s best friend) drifts back into Harlan’s life, and the two struggle to form a troubled relationship. Each person in Harlan’s life—Billy’s son, Vince, Billy’s Father—keeps Harlan tied to his tragic past.

Then the unthinkable happens. Another shooting at another race, followed by a note from the shooter letting Harlan know that the shooter is stalking him. Harlan hires two gay, Rambo-like bodyguards, and their investigation reveals that the killer pursuing Harlan was also involved with Billy’s murder. Harlan goes into hiding, but finds himself constantly looking over his shoulder, waiting for the next bullet.

If all this weren’t bad enough for Harlan, it’s the late ‘70s and he finds that many of his friends are dying of a mysterious new disease that is affecting gay men. Caught between a tragic past that won’t let go of him and a future that holds only death and sorrow, Harlan Brown must find a way to survive the violence and challenges of changing times.

Harlan’s Race is Patricia Nell Warren’s long awaited sequel to The Front Runner.
The author mentions in the forward that she intends to write a third installment in the story featuring Falcon, Billy’s son, when he reaches his teens. Harlan’s Race is a dark bridge between Billy’s and Falcon’s stories.

This is a very dark and moody story. With Billy’s death haunting Harlan, and nothing to look forward to but the AIDS epidemic, there is little to feel good about here. The plot follows Harlan, Vince and others, as they all seem to self-destruct after Billy’s death.

Although the book is superbly written, I closed the book feeling disappointed. This is a murder mystery where the stalker/murderer is revealed at the end, and it is meant to be a shocking disclosure. I, however, figured out who the murderer was halfway through the story, so the ending fell flat for me. Not only was it flat, much of the plot felt too contrived to be believable. Although I must say that there were moments in the romantic bond between Harlan and Vince that were touching and rang true.

Although Harlan’s Race can be read without reading The Front Runner, I think that would be a mistake. Harlan’s character is well developed, but many of the supporting cast are not, and one needs to read TFR as background to these characters in order to fully appreciate the depth of this story.

I have enjoyed reading several Patricia Nell Warren books and think she is a terrific talent, but Harlan’s Race is not a book I can highly recommend. I am, however, looking forward to reading the third book in the series, Billy’s Boy.

Posted by AlanChinWriter at 10:00 AM

I was trying to remember the name of this book just this morning.