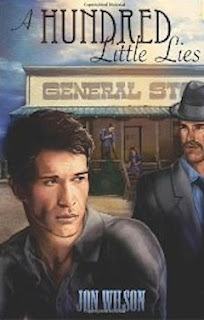 
Jack Tulle owns and runs the general store in the sleepy town of Bodey, Colorado. He and his eight-year-old daughter live above the store. For years he has played the doting father, honest businessman, member of the town council, and pillar of the community. He is respected and admired by all.

But then the local saloon announces plans to hold a professional poker tournament that boasts an impressive grand prize. It is sure to draw the West’s elite card players, which could cause Jack Tulle to loose everything he cares about. You see, for eight years Jack has been living a lie, and lies are like termites, where there is one, there is a whole nest. Lies multiply and build on themselves until you’re standing on a rickety platform that could collapse at the slightest gust of wind. And this poker tournament could prove to be a hurricane for Jack.

The author very cleverly reveals Jack’s hundred little lies one or two at a time. The first reveal comes in the form of Tom Jude, a card shark that Jack used to run with. When Tom shows up a few days before the tournament, the two are reunited and the reader realizes they were more than friends, they were—and still are—in love with each other. After some fairly hot sex, the reader finds they were more than lovers, they were partners-in-crime. Both men were card cheats, con men, and always available for an opportune swindle. They were hard drinking, hard fighting scoundrels.

As more old “business acquaintances” come into town for the tournament, Jack finds himself scrambling to maintain his deception by piling on more lies to the town’s folk. But of course the more lies that accumulate, the more truths that are uncovered. And the reader discovers that at the bottom of the heap are some truths that are much worse than cheating at cards and the odd swindle. Jack is hiding something that could send him to prison, perhaps even the hanging tree. He knows he should simply leave town until everything blows over, but he can’t abide leaving Tom Jude again.

And of course Tom Jude has his own secrets, and Jack feels compelled to get to the bottom of them before it’s too late.

This is a funny, moving, delightful romance. What struck me most is the enchanting voice the narrator takes on, reminiscent of Mark Twain, which adds so much pleasure to the experience. The story is skillfully crafted, and because it takes place over just a few days time, the author goes into delicious detail with each scene.

Because of that detail, the reader is able to drill down into the many layers of the main characters and also the secondary characters. As the layers are pealed away, the tensions rise, making Jack and Tom arc, that is, develop as characters, making this a well-rounded and very satisfying story.

In poker terms, this book is an ace-high straight flush; only it’s anything but straight. It is an exceptional debut novel by a writer everyone should keep on their radar screen. I highly recommend this story to all readers.

Posted by AlanChinWriter at 5:28 PM