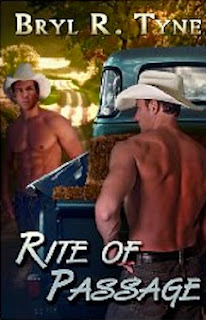 John Ashley Price is a celebrity author who has gone into hiding to escape the constant hounding from paparazzi and fans. He wants to become an island unto himself where he can write in peace and not have a soul in the world who knows who or what he is. His publisher, Carol, finds him the perfect getaway within the forested mountains of Colorado—a hick town named Divide.

Alone at his mountain retreat, John finds that his constant companion, extreme anxiety, refuses to leave him in peace. He must still take a regiment of pills to control his mood swings, and he finds he has a merciless case of writer’s block. On top of all that, he finds his cabin is not as remote as he anticipated. There is a neighbor within a stone’s throw, and the neighbor turns out to be just the kind of man that twirls John’s skirt—Mid-twenties, handsome, muscular, a silent cowboy type.

To pass the time and to do research for his next novel, John volunteers his time to help out at the local wild animal clinic. He does odd jobs but his real purpose is to research wolves and their habitat. What he finds instead is that he is being studied by the clinic foreman, Pat Smith. Then a series of strange coincidences unravel John’s new world, beginning with John discovering that Pat is in fact his sexy neighbor. John soon realizes there is some kind of plot afoot, but what could it be?

This story is a fun, romantic romp that had me smiling throughout and often laughing out loud. Neither the story nor the characters are overly complex, but it doesn’t matter. This is a fast paced, delightfully sexy tale.

What I loved most was the voice the author was able to capture and maintain. It has a Western twang, rough around the edges, yet reads smooth as silk. It described even mundane things in the most humorous ways. This is a funny story, without being slapstick or stupid, and yes, there is enough romance to warm your heart and enough sex to get your blood pumping.

Admittedly, there is no mystery here. The plot was pretty clear early on, but again it doesn’t matter. It is the delivery that makes this a fun and sexy read. Bryl R. Tyne is a huge talent. I can highly recommend this novella to all readers.

Posted by AlanChinWriter at 6:22 PM