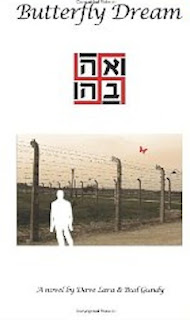 Banat Frantz is a Jewish boy growing toward manhood in Germany when Adolf Hitler comes to power. At an early age, Banat already feels the animosity directed toward his family. He experiences shame and fear, but doesn’t understand what it is that makes him different from those who hate. His upper-class family is stripped of almost everything before fleeing to Holland, where they think they have escaped Hitler’s grasp. But within a few years the Nazis invade Holland and they are made prisoners and shipped to work camps.

Banat grows into puberty while living in a concentration camp, and what he discovers is that his growing lust is directed at other boys, not girls. By now he knows to hide his feelings of being different than others. But when he meets Dovid, (yes, Dovid with an ‘o’), he falls in love. What starts as an adolescent crush deepens into a consuming love that will sustain Banat through the horrors that await him.

Soon the family is split up, and Banat and his father are shipped to a different camp. Over time they are shipped to several work camps, all the time moving closer to Auschwitz. Banat and Dovid are separated as well. By cunning and trickery, Banat does manage to survive the end of the war, and he goes about trying to track down his splintered family and bring them together again. There are joys and tragedies to be endured, and then the search for Dovid begins. Can Dovid have survived as well? Can the lovers reunite?

This is not an easy story to read, due to the shocking way the Jewish characters are treated by other Europeans. The horrors described both before and in the concentration camps is heartbreaking. But there are joys as well. Even in these brutal conditions and knowing what awaits them, they find love and tenderness, not just with Banat and Dovid, but other characters as well. This story is a testament to the resiliency of the human spirit, and also of the power of love.

Banat is a perfect character, exhibiting both qualities and faults, as he comes of age and maturity within the most brutal conditions. He must fight for survival, yet with his being gay, he can’t confide in his own family. With death and anguish a constant, he must somehow explore the depths of love, need and joy. And he does so with virtue and morality.

But this story goes far beyond the concentration camps. Once the war is over, Banat must continue to strive in order to reunite his family. This brings both joy and sadness, and in the end grows bitter because he finally comes out to his family. Banat turns away from his parents and continues his search for Dovid. He becomes involved with the emerging gay scene in Paris, and begins to explore his sexuality. But the despair of not finding Dovid eventually drives him across the Atlantic, hoping for a new life in America, and a chance to forget. He finds that new life, but in a most unexpected and beautiful way.

This story is a fascinating inner journey from adolescence to manhood, from innocence to love. As I said, it is a hard story to read, but well worth the time and emotional turmoil. WWII history buffs will especially appreciate this tale, but this is a story everyone can appreciate and grow from.

Posted by AlanChinWriter at 5:26 PM

Gah. That sounds like a fascinating read, but it also sounds like it will absolutely wring out the reader. :\