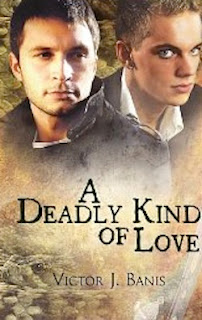 When Chris Rafferty returns to his room at a posh Palm Springs resort, he finds a naked man in his bed. This is not so unusual considering this gay resort is known for satisfying their clientele’s needs with young hustlers, but this hustler is a little too stiff for Chris’s liking. This hustler is dead. Even before calling the police, Chris calls his good friends, Stanley Korski and Tom Danzel, a gay couple who are San Francisco private detectives.

Once Tom and Stanley take the case, they drive to Palm Springs and meet with PS homicide detective Dick Hammond. The three men confirm that the deceased was a hustler who worked the resort, and that he was murdered and dumped in Chris’s room.

Tom and Stanley check into the resort, and are given the royal treatment while they investigate clues. They have a hunch that the killer was one of the well-to-do gay clients, and that he is watching their every move. The closer they get to identifying the killer, the more bodies pile up until the killer decides to target the detectives. The boys soon find themselves in a deadly game and in over their heads.

Deadly Kind of Love is the fifth novel in the Deadly Series, and the third one I’ve read. It is told with the same delightful voice and quick pacing that Mr. Banis captures with each of these Deadly books. Fans of this series will no doubt enjoy this latest offering, as I did, to follow these sexy investigators through plot twists and turns.

Banis has created something special with this detective duo, and the mystery and motives fall second to the interplay between these characters. Still, I felt something lacking in their chemistry in this 5th book. The magic that I’ve seen in other Deadly books was there, but not with the same wit and intensity. I also felt the author rushed to reveal the killer and wrap up the ending, which I must say was, none the less, exciting.

Followers of the Deadly Series as well as mystery lovers in general will no doubt enjoy this latest outing from master author Victor Banis.

Posted by AlanChinWriter at 8:21 AM