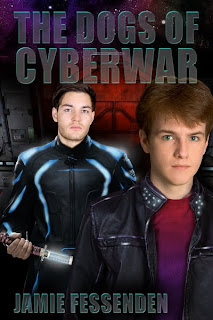 A fellow writer and friend, Jamie Fessenden, has just published a new book that I'd like to call everyone's attention to -- The Dogs of Cyberwar.

It's published by Dreamspinner Press, which is also my publisher. If you enjoy the excerpt below, the buy link is: http://www.dreamspinnerpress.com/store/product_info.php?products_id=2644

Blurb: Connor is a netrunner: a hacker who ventures into cyberspace to steal data from corporate computers. As he hides out in the slums of Seattle, he’s attacked by a street gang and, incredibly, rescued by one of the members. His rescuer is a man named Luis, who has decided Connor needs his protection.
But instead of providing safety, Luis’s presence wreaks havoc with Connor’s online identity, and they find themselves hunted by a lethal security force. While they attempt to escape the city, Connor finds himself struggling to survive with the most lethal killer ever pitted against the corporations that control the FreeCorp—and he risks losing his heart to the same man.

The gym had sleep capsules in a room off to one side of the locker room. These were “rooms” just big enough for a person to crawl into and sleep. But
they were comfortable enough and provided access to the Net, which Connor would need in order to finish the job he’d contracted for.

But when he swiped his wrist across the reader and the door swung open, he discovered a new drawback to having Luis for his bodyguard.

“Is that big enough for both of us?” the Latino asked, peering into the capsule.

This took Connor aback. “What? No, not really. Can’t you get your own?”

“I don’t have any money,” Luis reminded him.

Jesus. Just how much was this deal going to end up costing him on a regular basis?

“I suppose I could rent you a capsule,” Connor said, not bothering to hide his annoyance. The capsules were pretty pricey.

“Don’t be ridiculous. You have to sleep.”

“If I’m locked in another capsule, I might not hear if somebody comes after you.”

“It’s not like I get attacked every time I try to sleep,” Connor protested. But he could see from the look in Luis’s eyes that this argument wouldn’t get him anywhere. Luis had decided that Connor needed to be protected. And that meant not leaving his side, apparently. “So your idea of being my bodyguard is pretty much what other people would call a ‘stalker’?”

“Don’t you think your bodyguard should be nearby whenever you need him?”

“If I have to take a shit, are you going to come into the stall with me?” Connor asked him, irritated. “No, don’t answer that. We’ll save it for a surprise. In the meantime, if you’re going to be like this, you might as well just get in the goddamned capsule with me. They’re big enough for two, if
you don’t mind being snug. But leave everything you don’t need in the locker.”

Following his own advice, Connor stripped to his underwear. There certainly wasn’t going to be room in there to undress if Luis was inside with him. The one thing he brought in was his cyber deck.

Luis followed his example and stripped to his underwear, though he insisted on bringing his gun with him into the capsule. Connor prayed neither of them rolled over on it in the night.

It was pretty cramped when they were both inside and the door was locked, but thankfully the capsule had air conditioning. Not that Luis smelled bad. In fact, once he was stretched out beside Connor, his chest at the level of
Connor’s face, Connor found that he liked the faint masculine musk Luis seemed to radiate. The scent was clean and held a trace of the generic liquid soap available in the gym shower, but it was unmistakably manly.

It was impossible for their skin not to touch in this close space, but Luis didn’t seem to care. When Connor glanced up at his face, he found Luis looking at him thoughtfully with those beautiful dark eyes. Not for the first time, Connor wondered whether Luis was gay or straight. So far, he hadn’t given much indication—unless the fact that he had a strong desire to make himself subservient to another man was a sign.

“Um… just so we’re clear about this,” Connor began, uncertain how exactly to phrase the question, “Are you…expecting sex out of this arrangement?”

Luis shook his head, smiling at his discomfort. “No. Although I did my time giving hand jobs for money, so if you want me to get you off….”

“No,” Connor answered quickly. Luis was certainly not the first guy he’d known who’d resorted to prostitution to get by, so he didn’t fault him for it. But he didn’t want some guy helping him “get off” if the guy wasn’t enjoying it himself. “So you don’t like guys, then?”

Luis shrugged. “I guess I don’t really care one way or another. If I like someone, I’ll fuck them. It doesn’t matter if they’re male or female.”

“All right. That’s cool. I generally just like guys, myself.”

That seemed to end the discussion. Connor wasn’t certain if he liked the fact that Luis had left the possibility of sex open. This guy was already complicating his life. If they started fucking around, it would get even more complicated.


Luis smiled at Connor and lowered his head to the pillow they’d be sharing. “I already have a job as a bodyguard.”

“I want someone to protect,” Luis said, his voice beginning to sound sleepy. “I don’t like being the bad guy. Is that wrong?”

Connor sighed. “No, it’s not wrong. But you realize you’re protecting someone who steals and destroys data, don’t you? I’m not exactly a ‘good guy,’ myself.”

There was no response, and Connor glanced up to see that Luis had drifted off. Asleep, there was something innocent and childlike in his beautiful face. Of course, Connor had to remind himself, this was the man he’d just seen cut two men into tiny pieces.
.

Posted by AlanChinWriter at 1:50 PM