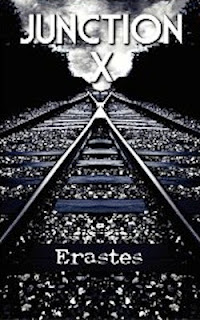 But then a new family moves in next door, and they have a beautiful seventeen-year-old son, Alex. A slow but powerful attraction grows between Ed and Alex. Ed has never considered himself a pedophile, so he fights the urge to flirt with Alex, but each time they are together, try as he might, Ed can’t control his growing desire for the boy. He stalks the boy until they have a sexual encounter while driving.

Ed is filled with gilt and remorse, and knows he’s going down an immoral path, but at the same time he lures Alex into a steamy affair. But how long can Ed juggle the responsibilities of family, office, and a teenaged boyfriend? And can Alex, being so young and inexperienced, control the volcanic feelings churning in his heart.

The first half of this story reads rather slowly, skillfully building in tension, and seems like a typical romance novel, albeit one with a middle-aged man falling for an underage boy. But shortly past the halfway mark, I realized two things: first, Ed was not the protagonist but rather, the antagonist; and two, this wasn’t a romance novel that would have a happily-ever-after ending. I was right on both counts.

This is a story about how unbridled obsession can ruin lives. Ed begins as a morally upright person with only a few skeletons in the closet. But his passion for Alex slowly leads him into being a pathetic, cheating scoundrel. And of course, he drags everyone connected with him into that same train wreck.

The plot is a simple one, without any subplots to cloud the water. But there is something to be said for a simple story told well, and this story is told extremely well. Erastes has obviously worked hard to improve her writing style and voice, and it shines here.

It is not often I come across a novel written in first person where the narrator is the antagonist. It gives the reader a rare glimpse into an unstable character, giving Edward tremendous depth as the author peals away his layers. He becomes a fascinating character, even as he disgusts. Yes, he’s a train wreck, but the reader can’t look away.

I did have one issue with this story. I felt that in the first ten pages, the author gave away too much, to the point where I knew most everything that would happen in the first 90% of the book. At midpoint, she broadcasted the other 10%. I would have been happier had she given away less and surprised me more.

That said, this is a passionate, emotional story. The characters pull the reader in and keep building the tension until the very last page.

If you are searching for a typical romance that will steam your glasses and make you feel good in the end, keep looking. If you enjoy a serious story of how mistakes cause pain, how passion can injure as well as please, then by all means, give Junction X a read.

Posted by AlanChinWriter at 5:11 PM