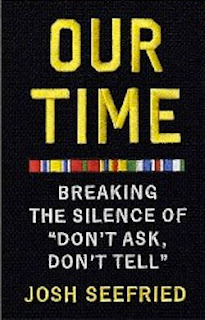 Our Time is an interesting, sometimes fascinating, often emotional compilation of first-person essays from gay and lesbian military personnel who had to hide their sexuality while serving in the US Armed Forces. It marks the end of nearly two decades of silence, and finally gives voice to the queer men and women who put their lives on the line in service to America under “Don’t Ask, Don’t Tell.”

Each story is only two to four pages long, a snapshot of the internal and external struggle that these service people had to live each hour of every day. Almost all branches of the service are represented, and these stories come from officers as well as enlisted personnel. These accounts detail the abuse—physical and mental—endured at the hands of their fellow soldiers and superiors, as well as the hardships suffered by the family members and partners of lgbt soldiers.

Now that these divisive policies are a thing of the past, gay and lesbian service people no longer need to live under the conditions outlined in these personal stories, but this book stands as a significant historical account of what was a legal injustice in this country, told by the people who suffered under the discrimination.

Each personal account records the unique experience of that service person, yet common themes weave through each of these stories:

Lieutenant Colonel Tim Walker writes, “I could not list my partner as a dependent on any forms. What were my rights—what were his rights—if I was hurt or incapacitated or killed? He would not even get notification if the worst happened. He was not eligible for my pension, benefits, visitation rights, counseling, or even the flag from my coffin if I died.”

Petty Officer Second Class Alex Johnson writes, “Part of my preparations for deployment included establishing guidelines for communicating with my significant other. We had to devise a way to hide the true nature of our relationship. So we created Yahoo e-mail addresses under fake names, and we developed a code to mask sensitive language. While I was deployed, if I wished to tell him I loved him, I would say, ‘One four three.’ We put other similar expressions in code so we could speak “freely” to each other.”

Warrant Officer Tania Dunbar writes: “For the past eleven years I have had to conceal my family from my friends. Soldiers, with whom I sweat, bleed, and cry, can’t ever meet the woman I love. Soldiers who depend on me for sound judgment and advice can never know who I myself go to when I need advice or solace. Friends who would die for me can’t ever meet the person who makes me want to live. Don’t get me wrong—there are a few soldiers who know I am gay, but it takes a long time to learn if you can trust someone with a secret that can ruin your career. So I don’t make friends easy, I don’t go to military functions very often. For me, home life cannot mix with work life.”

My one minor complaint about this book is the repetitiveness. There are over forty stories, and many parrot similar experiences. Still, throughout these many accounts the thing that shines through is the bravery and selflessness of these soldiers who defend our liberties while their own freedom was denied.

This is a significant book, both personally and politically. Josh Seefried, an Air Force officer and codirector of OutServe, has done a splendid job of presenting these voices of anguish and struggle and hope.

Posted by AlanChinWriter at 11:38 AM