Book Review: Gordan The Giraffe by Bruce Brown, Illustrated by A. Shelton 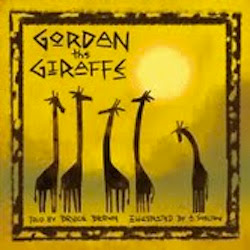 Book Review: Gordan The Giraffe by Bruce Brown, Illustrated by A. Shelton

Gordan is a young giraffe living in the secret kingdom known as Ugladunga. His playmates all shun him until one day Gary invites him to play the game of Mulunga Doo. The other Giraffes laugh at them, because Mulunga Doo is a game a male giraffe can only play with a female giraffe. When Gordon cries to his mother, she tells him not to worry, he has a big heart and can play the game with anyone he chooses. But when the others try to trick Gordan and Gary into a dangerous situation, their plan backfires putting the perpetrators in peril, and only Gordan can rescue them. Is his heart big enough to forgive and save them? Of course, this is after all a children’s tale.

One of the wonderful benefits of reviewing books is being exposed to a wide variety of genres and writing styles, and every once in a blue moon getting the opportunity to read a children’s book with an LGBTQ theme. I’ve had the privilege of reading several and I have found them all delightful. Gordan the Giraffe was no exception.

It is a simple storyline with equally simple words, yet with an underlying message of acceptance of people who are different, because even people who are different can be brave and selfless. A wonderful message for kids. One of the things that sets this book well above the norm is the colorful and beautiful artwork. Like many kids books, there are plenty of pictures to tell the story, and is one I would be proud to hang on my walls as art.

The child inside me found this book to be an enchanting read—both mentally and visually—and I highly recommend it to all kids, and the kids inside of other adults.
This books is not released yet.

Posted by AlanChinWriter at 4:40 PM

Does this book have a buy link yet?

Hi Sue, The author has yet to send me a link. I tried googling it, but found nothing. Sorry.