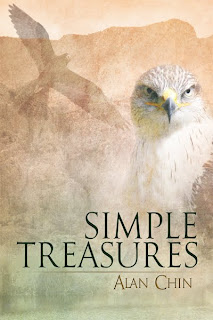 When I want to curl up with a beautifully written, heartfelt tale of redemption, I come to Alan Chin -- he's the ticket. And again, with Simple Treasures, he has authored a stylish work of depth. I'm Native American, so I was fascinated with his treatment of tribal mysticism, especially in regard to the afterlife. He hit it right on the head. Life and death are leaves fallen from the same tree. If hope is what we sow, our lives are redeemed. It quite took my breath away.

Simple is not a simple man. He has a past, which he records into journals because of his amnesia, which resets his memory banks each day. Like his mind, he's a drifter, but we soon learn that although he copes with daily existence, he has heaps of hope nestled within his self-doubts. Simple is cast into an almost untenable employment situation where he must interact with other damaged souls -- Jude, Emmett and Lance, all in need of Simple's brand of healing -- a course of growth as old as the hills. All the emotions dance through this tale -- love, self-doubt, rage, greed and pride. Simple is the tie that binds them all. I wished the tale was longer, so I could linger at that dusty haven of a ranch where these souls intermingle.

Alan Chin's strength is character development, although it goes beyond that. Each character is set on a rolling tide, which hooks into an aspect of the main theme. The tone recalls Casteñeda with a hint of King's The Gunslinger, although Mr. Chin's style is uniquely warm -- his story telling subtly tugging at the heartstrings. I really came to care for all the characters -- even the chief bum of the story. I love the way the characters developed, overlapping each other, heading for the same point, but then hurtling to different destinations. Simple Treasures is superbly written. I highly recommended it.
Buy Link: http://tinyurl.com/7bde4f4

Posted by AlanChinWriter at 11:00 AM