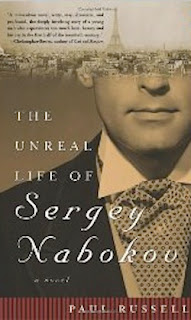 Sergey Nabokov was born into a wealthy family in pre-communists Russia. His father was a respected member of the government. His older brother would grow to become the brilliant writer, Vladimir Nabokov. While enjoying a luxurious lifestyle in Russia, Sergey grew up in the shadow of his older brother. As Sergey matured into puberty, it became apparent that he was gay and a bit of a dandy, which, as far as his family was concerned, pushed him deeper into the shadow cast by Vladimir.

Both brothers were forced to flee their mother Russia when the Bolshevik revolution brought the communists to power. They traveled to England where they received an education at Cambridge University, and then settled in Paris. Sergey became known to the artist crowd of pre-war Europe, hobnobbing with Gertrude Stein and Alice B. Toklas, Picasso, Diaghilev, Stravinsky, Magnaus Hirschfield, and Nijinsky. But as his finances dwindled, Sergey became more and more desperate, turning to opium for a bit of comfort and living off the generosity of men. As war with Germany loomed, Vladimir fled to the United States while Sergey ended up in isolation in war-torn Berlin. Sergey died after spending two years in a Nazi concentration camp for the crime of being gay and for speaking out against the Nazi regime.

This is a meticulously researched novel, which recreates the rich and changing world of pre-WWII Europe with exquisite detail. The novel starts in Berlin during the decline of Nazi Germany, with most of the novel seen through flashbacks. Russell takes the sparse details of Sergey’s life and weaves it into a fictional memoir that is both convincing and inspiring.

What struck me most about this work was the lavish, beautiful prose. I’ve read few modern novels that can compare. The voice Paul Russell captures is both lush and believable. The detail in the scenes he paints is remarkable.

I did have one issue with this novel. Russell committed the one sin that a novelist should never allow—he often bored me. There was simply so much detail to wade through that, however beautiful, slowed the action down to a crawl. Vast quantities of detail, in my opinion, added little to the storyline. The emotional highs weren’t very high, the lows not so low. Through vast sections of the story I found myself wanting to skip ahead to the next chapter, or the one after that.

This is a riches to rags story, contrasting the two brothers’ lives. It is ultimately a novel about a vulnerable boy who, through adversity and a few bad choices, grew into a courageous man. It is a remarkable work.

Posted by AlanChinWriter at 8:35 PM