A new novel by Carey Parrish 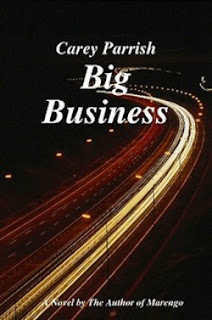 I’m thrilled to announce that my good friend and colleague, Carey Parrish, has release a sequel to his wonderful novel, Marengo. This new novel, Big Business, brings back the delightful residents of Number 56 Kensington Street, Holland Park, London. I can't wait to read it.

Synopsis:
Busybody landlady Mrs. Shugart, with her ally Mr. Humbolt at her side, has an empty flat for rent, but her tenant, upwardly mobile attorney Ms. Sandra Leverock, is anything but what she was hoping for. Especially when she discovers that Ms. Leverock is the niece of her oldest nemesis, Margaret Armstrong.

American journalists Rob Brent and Jeff Schrader are contemplating a life changing opportunity that promises them more angst than joy, and upstairs neighbor DJ Pack finds himself attracted to Ms. Leverock in spite of the fact that she's engaged to billionaire Edgar Allardice.

As the neighbors settle into their new circumstances, Mrs. Shugart finds herself grappling with a past that she thought was settled long ago. Ms. Leverock and DJ grow closer, while Margaret becomes embroiled in the mystery of who is trying to buy out her shares in her late husband's corporation, and she enlists Rob and Jeff to assist her in the quest. And Allardice, determined to see his empire expand by any mean necessary, is pulling the strings like a puppet master.

Murder, intrigue, and corporate ruthlessness combine to teach the residents of Number 56 Kensington Street just how dangerous the world of big business can be.

The sequel to Marengo, Big Business is Carey Parrish at his best.

A quote from the author:
"I was very pleased that the characters in Marengo struck such a chord with readers that even almost two years later I was still receiving emails asking for more of them. Whenever I write, my only goal is to tell a good story that I hope readers will remember. So Big Business is the answer to all those requests I got for a continuation of the characters from Marengo. I hope the new novel is as satisfying as the first."

Posted by AlanChinWriter at 6:05 PM

Thank you so much, Alan! You're always in my corner, and I hope I repay the debt well.