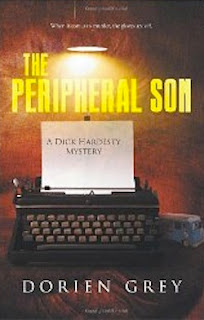 Victor Koseva is a loner, has few friends, is the black sheep of a dysfunctional family who has nothing to do with him, and he is gay. While working as an investigative reporter, covering a story concerning doping within a professional boxing syndicate, he disappears without a trace.

Victor’s sister-in-law hires Dick Hardesty to investigate. Hardesty piles up more questions than clues until Victor’s body is found at the bottom of a ravine near a popular gay cruising area. All signs point to an accident, and the case looks closed, but Hardesty has other ideas. He keeps following a trail of clues that bring him up close and personal with a handsome gay middleweight boxer with eyes on the championship, Victor’s kleptomaniacal ex-boyfriend, and a host of suspicious and unsavory characters who were at the right place at the wrong time. Was it murder or an accident?

As will all of Dorien Grey’s mysteries, the author gives the reader plenty of opportunity to know Hardesty’s family: partner, Jonathan, and son, Joshua. And the reader gets a feel for the rich and loving life they share, which is a nice contrast from the gritty dealings of a murder case. Although it did seem to me that Dick and Jonathan’s relationship was not as intimate as in previous novels. Could the stress of raising a child be draining the romance out of their relationship?

This mystery is not the most exciting read on the shelf. As with all Dorien’s stories, he doesn’t use explicit sex, or gunplay, or bombs blowing up baby carriages in order to titillate the reader. And because he places his stories in the ‘80s, he doesn’t use familiar computer or iPhone apps to help him solve the cases. He uses solid storytelling to guide his readers to a logical conclusion. It is a puzzle that must be muddled over, worried like a dog with a bone.

Mystery purists will no doubt enjoy this 14th book in the Dick Hardesty series. But Grey’s writing style will allow all readers to enjoy this novel. I can recommend this to all readers who enjoy well-developed characters and an intricate plot.

Posted by AlanChinWriter at 3:06 PM

Thank you, Alan, for the always thoughtful and perceptive review of "The Peripheral Son."

I'm always delighted when a reviewer picks up on something I was totally unaware of, and you did it with your comment that raising Joshua might be draining Dick and Jonathan's romance. That is certainly something that had never occurred to me and I will make a point to address in the next book.