The Lonely War Cast of Characters: 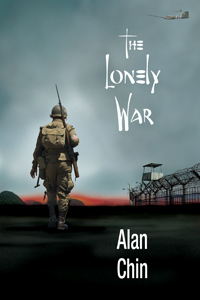 A new edition of my second novel, The Lonely War, has recently been released. I thought it would be fun to give readers a list of characters found in that story.

Description: Like most war novels, The Lonely War envelops all that is unique to war, the horror of battle, overcoming fear, the cruelty of soldiers, the loyalty and camaraderie of men caught in a desperate situation. Yet, it stands alone in two important ways. First, it is a passionate story about a tender love developing between an officer and an enlisted man, revealing a rare and dignified portrait of a couple struggling to satisfy desire within the confines of the military code of conduct. Secondly, it describes the heart-wrenching measures of how much one man will sacrifice to save the life and reputation of the man he loves.

Andrew Waters: Born the son of an American in Vietnam, he is half Caucasian, half Chinese, and because he was schooled in a Buddhist boarding school, he is 100% pacifist.  Yet, when he is brought back to America after Japan bombed Pearl Harbor, he reluctantly enlists in the Navy to serve his country. Because he is half Asian and Buddhist, he suffers discrimination from everybody aboard his ship, except his executive officer, Nathan Mitchell. This slim thread of acceptance from the officer grows into a full-blown and passionately felt love.

Nathan Mitchell: Raised on a ranch in New Mexico, Nathan is the executive officer of the USS Pilgrim, a destroyer during WWII. He takes a liking to this new kid, Andrew Waters, who quotes poets and philosophers, and is so radically different from the other crewmen. What starts as a desire to protect Andrew from racial discrimination grows into a personal relationship that will eventually save Nathan’s life, and stay in his heart until death takes him.

Hikaru Tottori:  Born to a Japanese family of military men, Tottori is the commandant of the brutal Changi POW camp on Singapore Island. He has been hardened by war, and craves the opportunity to lead men into battle, but has been assigned the job of babysitting prisoners of war. This is a man who values honor and pride above everything else. All is bleak for him until Andrew Waters is led into the camp. Tottoti, a gay man, is completely taken with the young prisoner, and makes a deal with Andrew to lure the boy into his bed.

Clifford Baldrich: Clifford is the son an English diplomat in SE Asia, and who was Andrew Water’s close friend in the Saigon boarding school. Clifford is gay, effeminate, and the sweetheart of almost every man in the POW camp. He is the closest thing the men have to a woman, and he loves the attention.

Joe Hudson: a sailor aboard the USS Pilgrim. He is a homophobic brute, and makes Andrew Water’s life a living hell until they both find themselves in the Changi POW camp. To survive the camp, Hudson and Andrew must help each other, becoming partners in crime.

Lieutenant Fowler: An officer in the British army, Fowler quickly becomes Andrew Water’s enemy. Once Fowler sees Andrew Waters getting special treatment from the commandant, he will stop at nothing to destroy Andrew.

Posted by AlanChinWriter at 8:29 AM

This is one of those books that I cannot get out of my mind. I think 20 years from now, it will still be with me.