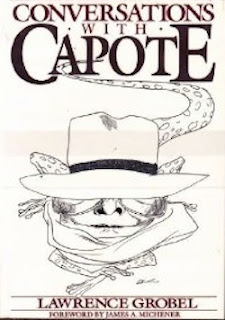 “I am a homosexual. I am a drug addict. I am a genius.” —Truman Capote

Between July, 1982 and August 1984, writer Lawrence Grobel recorded many interview sessions with Truman Capote for what they both agreed would be the definitive in-depth interview with the great writer. This book is the remarkable result of those conversations. As startling, candid, and controversial as the man himself, these interviews have become a key part of the Capote legacy.

I have always been enchanted by Capote’s stories, and reading this book I became mesmerized by the man behind those stories. He had a genius that elevated talk to art, and gossip to literature. He bedazzles with brilliant insight, and also reveals a condescending pettiness toward many of his contemporaries.

I found Truman’s revelations about himself both candid and illuminating when talking about his childhood, early fame, his sexuality, and his battle with drugs and alcohol. The author also has much to say about the rich and famous, including Jacqueline Onassis, Norman Mailer, Marilyn Monroe, Lee Harvey Oswald, Elizabeth Taylor to mention a few, and these conversations about others tend to reveal more about Capote than the people being discussed.

“I came to understand that death is the central factor of life. And the simple comprehension of this fact alters your entire perspective…. The experience served to heighten my feeling of the tragic view of life, which I’ve always held and which accounts for the side of me that appears extremely frivolous; that part of me is always standing in ta darkened hallway, mocking tragedy and death. That’s why I love champagne and stay at the Ritz.” –Capote

This is a must read for anyone who enjoys Truman Capote’s stories.

Posted by AlanChinWriter at 9:37 AM