Book Review: The Rape of Ganymede by John Peyton Cooke 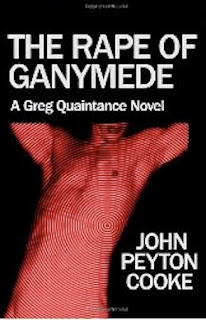 When the mother of a precocious fourteen-year-old gay boy claims she has evidence that mega-rock-star Jimmy Gilbert has been having sex with her son, Private Investigator Greg Quaintance is hired by Jimmy’s lawyer to thwart the mother’s multi-million-dollar extortion attempt. But only hours after Greg takes the job, the mother ends up murdered and her son goes missing. Greg’s job turns to finding the boy before any harm can come to him. From the streets of Manhattan to the home of presidential power, the bodies start piling up as Greg navigates his way through this plot of twists and turns.

The Rape of Ganymede is a murder mystery in the Greg Quaintance series. It is a story that tackles a difficult subject, child molestation, but rather than dealing with that issue effectively, the author turns this plot into a vehicle to showcase his sexy protagonist. The dialog is often clever, the plot highly imaginative, and a few scenes provide good action and are well written.

For the most part, I found this to be a mildly interesting storyline that was marred by poor writing, one-dimensional characters, and over-the-top situations that I found impossible to suspend belief.

My chief issue is that the story is mostly told through dialog. The author puts two people in a room and they talk for ten, fifteen, or twenty pages at a time, over and over again. There is much talking and precious little action. Admittedly, when there was action scenes, they were well written. Telling a story through dialog, however, quickly turns dull and tedious, which is how I found of most of this story.

The author does an excellent job of delving into his protagonist, who has several layers, but every other character had little or no depth. I think this is because these other characters have so little time on the page that the reader never gets to know them.

Admittedly, I am not a huge fan of mystery novels, but I have read several that impressed me. This was not one of those.

Posted by AlanChinWriter at 9:00 AM

Gah. I should somehow get you to read my novel and tell me how to fix it -- it's SO much talking and I can't seem to get away from that! :(