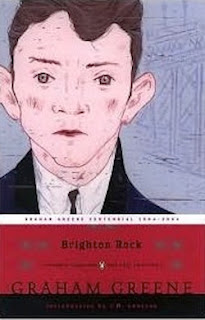 Brighton Rock is a novel of murder and menace, and the innocent people caught in the path of greed and violence. It lays bare the soul of a seventeen-year-old boy who stalks Brighton’s tawdry boardwalk with apathy on his face and blood on his hands.
Pinkie, the boy with murder in his heart, is beyond bad, he worships at the altar of evil. To him, violence is a deep and satisfying release, so much so that he has no taste for drink, companionship, or sex because they simply don’t measure up.  He is a sinister character, and chillingly fascinating.

When Pinkie’s sordid life becomes entangled with an innocent young woman and a loose, good-humored matron out for justice, things begin to unravel in a way reminiscent of Shakespeare’s Macbeth.

I’m a huge fan of Graham Greene, and this novel did not disappoint. It takes place in a time and setteing that I’m not particularly interested in, yet I was riveted to the story. This story is fascinating because of the mix of characters and how they interact, more so than the plot itself. Pinkie is pure villain, yet Greene skillfully shows the reader this characters fragile underside, to the point where the reader is hoping he’ll turn his life around. I think that is the fundamental question that this novel tries to answer, can someone who has a blood lust change, and if so, what does it take to mollify that sinister heart.

I can highly recommend this novel to anyone who loves well-crafted prose, characters, and plots. Bravo.

Posted by AlanChinWriter at 2:17 PM