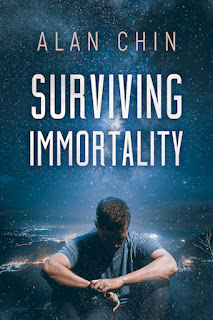 Hi everyone. Wanted to share a review of my latest novel, Surviving Immortality. I'm very grateful to the folks at Rainbow Book Reviews.

Book Blurb
This is the story of the fountain of youth.
When Kenji Hiroshige discovers a formula that will keep people youthful and healthy for several thousand years, he tells the world he will not divulge his secret until every gun, tank, battleship, and bomb has been destroyed. When the world is free of weapons, everyone can live forever. And then he goes into hiding.
Before he disappears, his son Matt Reece is exposed to the formula. Kenji takes Matt Reece on the run with him, but as they struggle to elude both government agencies and corporations who will do anything to profit from Kenji’s discovery, Matt Reece learns that world peace might not be his father’s only goal. But what can a young man who’s barely stepped foot off his isolated ranch do in the face of something so sinister?
This is the story of human greed and the lust for violence. It’s the story of a world on the brink of destruction, but it’s also a tale of one young man who finds in himself the will, courage, and compassion to stand against the darkness—both outside and within himself.
This is a story of hope.

Book Review
At first glance the title sounds like a contradiction because immortality, by definition, means survival. And maybe it does on a purely physical level for each individual, but for humanity as a whole? It would require entirely different survival strategies than the ones we have developed over the millennia since we stopped living on trees. Immortality, for humans so far, is a philosophical construct. Its consequences, beyond what it might mean for an individual, are hard to imagine – and Alan Chin does a good job of speculating about the effects it might have. Religion might cease to exist since no fear of death means no need for an afterlife so no more funding for any religious organization. The pharmaceutical industry would be gone overnight. The medical profession – wiped out except for a few doctors needed for occasional reapplication of the formula. And what about the threat of overpopulation with everyone surviving? It requires a lot of imagination to think through the effects of immortality on humanity, and Alan Chin has done an amazing job at presenting one possible scenario. He takes a kernel of (unproven but not impossible) science as a catalyst that explains how the formula for immortality is discovered, uses a range of characters to illustrate various possible reactions, and spins a tale that includes murder, secrets, deception, betrayal, and more twists and turns than should be legal in one novel. The resulting story is breathtakingly spellbinding, to say the least.

Matt Reece is only eighteen when the proverbial sh*t hits the fan, has lived on his family’s ranch since he was born, and has been pretty much a recluse for the last two years. Like his father Jessup, he is gay and the bullying in school got so bad after his older brother left two years before the story starts that he has been homeschooled. In no way does any of this prepare him for what is to come – though I would argue that nothing can prepare anyone for having to face immortality, not to mention every single political, military, and religious group on the planet being after you for the secret. Matt Reece feels the burden of responsibility to “do something great” with the gift he has been given, but, at first, he has no idea what that might be. Combined with being on the run and fearing for his life, he faces terror from so many different angles that it’s a miracle he remains sane.

Kenji has invented the immortality formula but he is a shifty character almost from the start. While he seems to have commendable goals – like ending war, poverty, and disease – I did not like his attitude toward his husband, Jessup, and that was before the blackness of his soul emerges. The things he does to achieve what looks like a noble goal expose his ruthless side, and in that sense, he is a perfect incarnation of the principle that “the end justifies the means” which has terrifying consequences for his family and, ultimately, for him.

The story is told from different points of view, revealing a variety of perspectives offered up like puzzle pieces. Nobody knew everything at any point in time, nobody had any sort of control, and most characters were out to save their own behinds. Pretty realistic on any given day, but with the bombshell of immortality affecting everyone’s world view all of a sudden, this was particularly true. Alan Chin does not pull his punches with criticism on religious leaders, multinational corporations, the corruption of governments and politicians worldwide (but particularly in the US), and the military and law enforcement are shown from their worst side as well. As a whole, this novel offers an assessment of the worst side of the human race, and the emergence of the potential of immortality worsens the greed, infighting, and ruthless power-grabbing about a thousandfold. The situation changes the world as we know it to the point where it becomes a postapocalyptic situations where new rules emerge from the rubble that used to be civilization.

Despite the overall darkness shown by exposing humanity at its worst, there are a few flecks of hope and light throughout. Matt Reese is young and naive and seems helpless at first. He suffers both emotionally and physically as Kenji tries to drag him down into the moral abyss that is Kenji’s soul. But there is a stubborn goodness in Matt Reece that gradually grows stronger as he finds his way. Finding love gives him purpose, his family members join him in his fight, and when courage grows out of fear, Matt Reece emerges like a phoenix from the ashes, a very different person than he was before.

If you like thrillers with a global scale, if you want to watch a family go from peaceful ranchers to the only guys who can save the world (with the help of a few good men), and if you’re looking for a suspenseful read that explores human nature in a mesmerizing story with a surprisingly hopeful ending, then you will probably like this novel as much as I do. I found it emotionally draining yet utterly captivating!
DISCLAIMER: Books reviewed on this site were usually provided at no cost by the publisher or author. This book has been provided by DSP Publications for the purpose of a review.

Additional Information
Posted by AlanChinWriter at 7:42 AM No comments:

Posted by AlanChinWriter at 8:16 AM