A Monkfest in Chang Mai 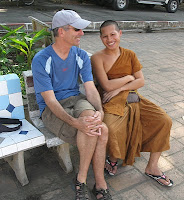 On the first day we came to Chang Mai we visited our favorite temple, Wat Pra Singh. It was clear at the time they were preparing for something big. There was much building going on – one sculpture three stories tall and several sitting areas for hundreds of chairs.

Slowly the building took shape, and each day we revisited, more monks seem to be milling about. The place was clearly gearing up for something. Then, after weeks of preparation, what Herman and I are calling a Monk-fest began, complete with live music, lots of ceremonies, plenty of praying, and a nightly session where an aged monk climbed on to a dais, and droned on in Thai, while several hundred monks and spectators prayed.
After two days, of witnessing these events, an English-speaking monk informed us that the
aged monk speaking nightly was the President of all monks in Thailand, and monks from all over Asia had traveled here to hear his lectures on the Dharma. As it turned out, this festival was a five-day advanced training session for monks which also included the cremation of another venerable monk (we have no idea who).

Indeed, I have never seen so many monks gathered in one place in all my travels. Unfortunately, we were not able to understand any of his teaching because we only speak a few words of Thai. It was, however, fascinating simply to sit in the background and watch the various ceremonies and listen to the chanting. On the last night, the three story structure they had build was burned to the ground, accompanied by fireworks and loud music. It turned out that it was the venerable monk’s funeral pyre.
You can view all the pictures of this on http://hermanandalan.blogspot.com

ew Year to All.

Posted by AlanChinWriter at 6:37 PM