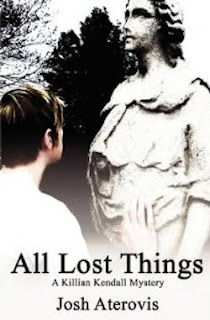 Reviewed by Alan Chin
Published by P.D. Publishing, Inc.
Pages: 318
All Lost Things is a Killian Kendall Mystery, I believe the third in a series. The story picks up with Killian about to graduate high school, and change is in the wind for our hero. Within a few short weeks, he graduates, breaks up with his long-time boyfriend, and starts a new job as an assistant to a private investigator. But the cherry on the cake is when his ex-boyfriend, Asher, comes to him for help. The boy who Asher dumped Killian for is accused of murdering his father. Asher begs Killian to help prove his new boyfriend is innocent. Killian reluctantly agrees to take the case, having no idea what kind of a hornet’s nest he’s stepping into.

At the same time, Killian’s surrogate parents decide to buy a historical mansion and plan to turn it into a bed and breakfast. But Killian soon discovers that the house is not only rich with history, it is also haunted. But it seems he is the only one who believes it. He must find a way to convince the others, and himself, that he is not losing his mind. Or is he?

I had a ball reading this novel. Although the target audience for this novel is young adults, this is a story that people of all ages can enjoy. It is sometimes touching, often funny, and very well written. Although this is the first Killian Kendall mystery I’ve read, this one convinced me to read all the others.

The characters are well developed and interesting, especially the protagonist who charmed my socks off. The pacing was strong and moved at a fast clip. And I was kept guessing all the way to the down-to-the-wire finish. This was a thoroughly intriguing read.

As much as I enjoyed this story, I did have two issues with it. Not to give the ending away, but when it came time to reveal the true villains and how they committed the dark deeds, I felt a bit let down. The reveal was too easy. The author had done such a superb job to that point of juggling the clues and keeping the tension as tight as a bowstring. I was expecting something more intricate for the reveal.

The other issue was that the “A” and “B” stories didn’t join. The A story is Killian solving the mystery, of course. And the B story is his parents buying the haunted house. What most often happens in good literature, is that the A and B story run in parallel for most of the story, like to trains racing along side by side in the same direction, but then at the beginning of Act 3, the tracks converge and the two stories collide. That is, something happens in the B story that helps resolve the A story. But in this novel, the A and B never converged. The B story didn’t add anything important to the mystery, and I felt the author stuck it in there as a setup for a future story, which I found disappointing.

Those two issues, however, did not keep me from being totally engaged throughout the story. I can highly recommend this novel to all readers who enjoy interesting, tense, well thought out mysteries.

For more information about the book or author, press here.

Posted by AlanChinWriter at 4:32 PM