Book Reivew: Lonnie, Me and the Hound of Hell by Marian Allen 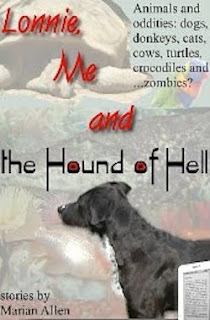 Reviewed by Victor J. Banis
Published by Smashwords
The best word to describe Marian Allen’s short story collection, Lonnie, Me and the Hound of Hell, is extraordinary. Extraordinary in the most literal sense, for starters, because there isn’t a single story among these ten that could be described anywise as “ordinary.” Here is a partial summing up of their themes: In trying to negotiate a deal with the devil, a man believes he’s summoned up instead the devil’s own dog. Two tiny mice come to the rescue of a terrorized little girl. Hmm—over here, we’ve got zombies and man eating wolves. Not to mention Wicca and dueling sorceresses fighting over a horse and a sort of fish. Plus an extra-terrestrial dog. Vampires fixing horse races. Metaphoric (I think) crocodiles, and a gay cat who outwits more aliens to save his boyfriend. So, mostly animal tales, but definitely not your run of the mill animal tales.

They are all of them extraordinary as well in the quality of the writing, which is brilliant indeed. To be sure, there are chills and thrills here and some mystery, at least in the sense of the mysterious, and even romance (if you can think of a gay Persian in romantic terms) but what strikes me as the most salient element in all these stories is a razor sharp and often wry wit.

But, if the collection as a whole is far from the ordinary, the individual stories themselves are hardly any less different from one another–which makes reviewing the book difficult, since I can hardly review every one of them singly, and what I can tell you about one might have little bearing on the next.

Take the title story, for instance, possibly my favorite. Lonnie, Me and the Hound of Hell is roll on the floor funny. Two good ole boys baptize—yes, you read that right—what Lonnie thinks is the Hound from Hell. To do this, they need holy water, and they make their own holy water by taking some ordinary tap water and boiling the hell out of it. Which I think ought to give you the flavor of this one without giving any more than that away. But, don’t expect anything else in the collection to have this same artfully captured voice.

High Stakes has an altogether different voice, and it is funny, too, but in a far more uptown, Damon Runyan way. Vlad the Roumanian hires a mortal detective to find out why his race horses keep losing, and sends the Satin Doll to assist in the investigation, with hilarious results.

In Sledgehammer, the author simply drops you down in a chase scene on, one presumes, the Russian Steppes, with the narrator and his parakeet (I told you these were not ordinary) pursued by zombies riding on wolves. High drama indeed.

And Mr. Sugar, in Mr. Sugar versus the Martians, is that gay Persian I told you about, who gets abducted by little green men who want to “sample” him, but gets his fur up when they also steal the “boy next door,” the object of his affections, and the little green men learn what others have learned before them – When his Sweetie is threatened, a gay male can turn from Sugar to Wildcat in the flick of a tail. Or, put it another way, neutered doesn’t necessarily mean “no balls.”

Well, if all this sounds a little outré to you, be assured that the author makes it all not only believable but quite accessible—I suspect there’s a little witchcraft at work there, frankly. My advice is, just get the e-book for yourself, especially if you like animals – priced at $1.49 it’s a true bargain. Just don’t expect to read Dick and Jane and Spot. These are not those kinds of creatures.

Posted by AlanChinWriter at 6:10 PM