Hi Everyone,
I'm excited to share the two possible covers that will appear on my novel, Match Maker, coming out in September. I think the folks at Dreamspinner Press have done a fantastic job, but I can't make up my mind which I prefer. So please leave a comment or email me ( alanhchin@gmail.com ) to let me
know which one appeals to you.
Match Maker Blurb.
In the four years since being forced off the professional tour for being gay, Daniel Bottega has taught tennis at a second-rate country club. He found a sanctuary to hide from an unkind world, while his lover, Jared Stoderling, fought a losing battle with alcohol addiction to cope with his disappointment of not playing on the pro circuit.
Now Daniel has another chance at the tour by coaching tennis prodigy Connor Lin to a Grand Slam championship win. He shares his chance with Jared by convincing him to return to the pro circuit as Connor’s doubles partner.

Competing on the world tour is challenging enough, but Daniel and Jared also face major mediaattention, political fallout from the pro association, and a shocking amount of hate that threatens Connor’s career in tennis, Jared’s love for Daniel, and Daniel’s very life.
Cover #1 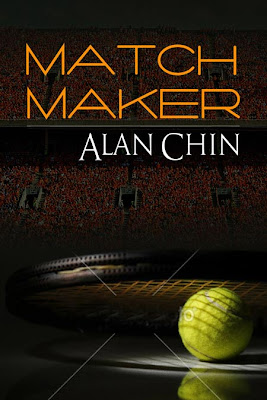 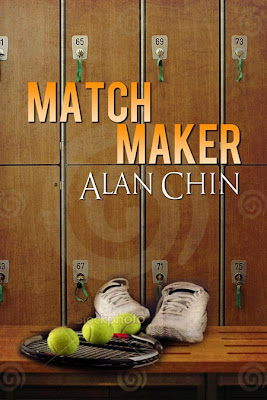 Posted by AlanChinWriter at 5:16 PM

Alan, I prefer number 2. But then on the right ppl, these shoes would be hot!

Alan, I like #2 better too. I like the color and composition. Number 1 is good too, but a bit dark and the tennis ball is bright against the background.

This is a hard one. I like them both, but I think I'm going to go with #2. It took me a moment to figure out what I was seeing with #1.

So much depends on the story itself.

Number (1), to me, has a more mystery/suspense feel to it, a classy, serious font.

Number (2), something about it, seems light-hearted, more of a casual style, strictly romance, with the snappier, casual font.

Congrats Alan! I like them both, but I found #2 very eye catching and it fits the tone of the blurb nicely.

Sorry that was supposed to be "I found #1 very eye catching and it fits the tone of the blurb nicely."

I liked the first cover too. More dramatic. Not enough contrast in the second cover. (Oranges, browns, whites, etc.)

Both are good, Alan. The top is much darker and hints of mystery, so after first choosing it I went with the second. I'm sure whichever you choose will be fine.

Both are nicely done, but I prefer #1. The second reminds me a little too much of the cover for a high school sports novel, while the darkness of the first hints at more serious themes.

I prefer #2. The first one is a little dark. Congrats!

#1 fits the mood of the story better, going by your blurb.

Just wanted to chime in and say that I like cover #1 the best.