Book Review: Tales My Body Told Me by Wayne Courtois 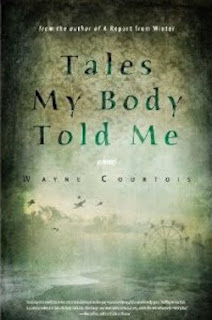 Paul Lavarnway lives a comfortable life with his partner, Eric. Then Paul meets and becomes infatuated with Richard, a man he meets at the local gym. They have an affair that begins as car-sex at the gym parking lot, and progresses to a date at Richard’s house. Of course, after lying to Eric about his activities, Eric finds out about the affair and leaves Paul.

Thus begins a series of events that leads Paul to East Oak House in the town of Two Piers, Maine – a group home for “recovering homosexuals”. The house is a seedy place Paul shares with four other men trying to go straight with the help of a live-in counselor. The author turns this situation on its head, however, when the inmates begin to have nightly orgies. But there is something else amiss, and even though Paul is kept in a drug-induced mist for most of the story, he determines that something is terribly wrong. The question is, can Paul figure it out before things turn deadly?

This story is essentially a murder mystery, although the reader doesn’t realize that until nearly the end of the story. The plot, although clever, is difficult to follow and seems to wander aimlessly for the first two-hundred pages. Part of the confusion stems from the fact that the narrator is drugged and not thinking properly. His memories are disjointed, and he struggles to make sense of his life. The reader sees Paul’s world through his confusion. As Paul begins to see his life more clearly, so does the reader. The author manages to pull all the seemingly lose ends together in the end and make sense of it all. It is an ambitious plot, and a clever way to structure the story.

The thing I most enjoyed about the story was the author’s voice. Written in present tense, the prose is often impeccable. It carries the reader along as if in a dream. I think Wayne Courtois has one of the finest voices in modern fiction.

As much as I enjoyed reading his prose, I had numerous issues with the story. The main problem I had was that I didn’t care for the protagonist until the last fifty pages, and by then it was too late to care about his story. He comes off as a shallow and unsavory character, not the kind of person a reader normally wants to invest their time in.

I also had an issue with the pacing. Even though the prose was lovely, the story delved into uninteresting detail that drastically slowed the story to a crawl. I was often tempted to skip pages in order to move the story along.

There were a number of scenes with graphic sex, which I thought did little to move the plot forward. For me, that detracted from the story.

The last thing I’ll mention is that, in tying together all the plot points, the author presented several situations that were either way too coincidental, or simply unbelievable. It made the whole of the story seem false, at least in my eyes. That, more than anything, was disappointing. I expected more from such a talented writer.

Tales My Body Told Me is a bold story that breaks the mold of gay literature. It tells the story of a middle-aged man, struggling in a world that doesn’t appreciate him. In many ways the story is brilliant, and one is inclined to overlook the flaws. This is a book I can recommend to readers who like something quite different, and relish a challenge.

For more info on this author or book, go to http://www.waynecourtois.com/
.

Posted by AlanChinWriter at 5:46 PM