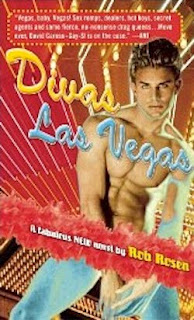 Reviewed by Alan Chin
Published by Cleis Press
pages: 286
The good news is that twenty-something Bill (aka “Em”) gets a $30,000 severance bonus when the bookstore he works for is bought out by a chain store. The bad news, Em’s dotty mother somehow sells the vase that had been in her family for generations at a yard sale for a few dollars. Em recognizes the vase on “Antique Roadshow” and finds out it’s worth $25,000. The mother is devastated, and Em vows to get it back for her. He manages to track the buyer to Las Vegas.

Em and his sexy friend Justin descend into Las Vegas hoping to recover the vase, although it seems they are more concerned about drinking, gambling, partying, and men, men, men. As this madcap adventure unfolds, they cross paths with a Patsy Cline impersonator, Jason’s boyhood lover, some hot guys fighting over Em, and murderers who are searching for them. The boys soon find themselves helping to solve an FBI investigation into organized crime. After the body count begins to rise and things are looking desperate for our young gay heroes, they call in the big guns: Glenda, their fag hag in San Francisco, flies to town to take charge and save the day. But can she? Can anyone?

This is a cute, often fun read, although my favorite parts were the detailed descriptions of Las Vegas casinos and sites. It is a murder mystery, but it is by no means a dark story. Rather, it is a fun romp with good pacing and clever dialog. I never laughed out loud, but there was something to grin about on nearly every page.

As for the story, it is a farce that gets more complicated and wacky until it collapses from the growing weight of absurdity. Once that happened, once it became too over the top, I confess I lost interest in the story and just wanted to be done with it.

My two complaints were that I thought the main characters were overly cliché, and that the story became too far fetched for my tastes.

Still, for readers who want to sit back and enjoy a romp, laugh, and not have to think about what they are reading, then I can recommend this book. It’s the kind of read that lends itself to sitting on the beach – it won’t matter if you get lost in the story and people around you will wonder what you’re laughing at.

Posted by AlanChinWriter at 8:37 AM